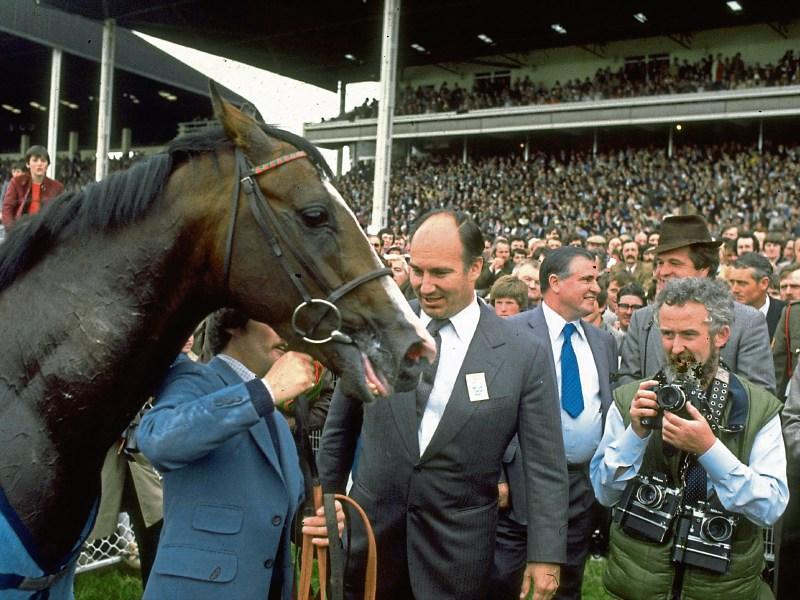 Shergar with the Aga Khan at the Curragh

Naas is full of racing anoraks. However, in former Irish Independent Racing Correspondent Damien McElroy, the town has got one of the sport’s most respected judges — and when it comes to racing yarns, you’ll do well to find a man who tells them better.

“My first memory of the Irish Derby was Santa Claus in 1964 because it was our first year living in Naas. Scobie Breasley had ridden the horse at Epsom but Willie Burke was the groom in the yard and he rode him at the Curragh because he was literally a steering job.

“Nobody other than the legendary Mick Rogers would have trusted a lad in the yard to ride the Derby winner and after the race, the horse was paraded in the town and whole of Naas went crazy.” says Damien of his earliest Irish Derby memory.

Anybody who knows Damien will realise he’s in full flow now and he’s not long in remembering the start of the Lester years.

“I remember Lester winning on two full brothers, Ribocco and Ribero, one year after another and that was unprecedented at the time. That was after Lester had ridden Meadow Court two years prior for ‘Darkie’ Prendergast and Meadow Court was co-owned by Bing Crosby.

“Bing was there the day he won with the pipe and the raincoat, smoking it contentedly, as the horse won. It was a bit like Alex Ferguson and Rock Of Gibraltar as he was invited into the horse for fame and glory.” 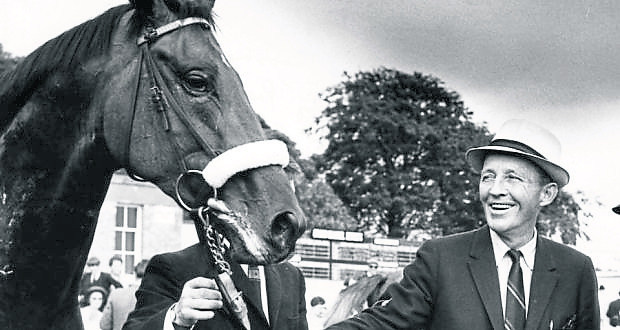 Bing Crosby with Meadow Court at the Irish Derby in 1965

He then moves on to one of the greatest horses to ever grace the Curragh turf.

“Then there was Nijinsky. Liam Ward, who as the Irish champion at the time, was on him at the Curragh after Lester had ridden him at Epsom. And Liam was told to basically don’t fall off.

“I think Nijinsky had the greatest turn of speed I’ve ever seen in a horse. It’s him and Sir Ivor which live in the memory of literally kicking into turbo, but Nijinsky was the one, there’s no doubt about that.

“Everybody was just crazy about him. He was the Arkle of flat racing at the time. Nijinsky was owned by Charles W Englehart and he was a multimillionaire who he lived on Coca Cola. He was a big fat overweight man, who died before his time.”

Many will remember The Minstrel, partly because of the never-say-die ride given to him by Lester Piggott in the 1977 Epsom Derby. Damien remembers him for other reasons, however.

“The Minstrel with the ear plugs in. Piggott had beaten the lard out of him at Epsom but he wore ear plugs that day because he was so hyper. It was the first time ear plugs were used at that level and that was down to Vincent of course. The horse would have gone ballistic in the preliminaries at Epsom and he wore them at the Curragh as well.”

Four years later, and it’s Shergar’s turn to get Damien’s vote of approval.

“Talk about another steering job.

“He had won at Epsom and then went on to win the King George before getting beaten in the St Leger. What happened afterwards, of course, was disgraceful.” 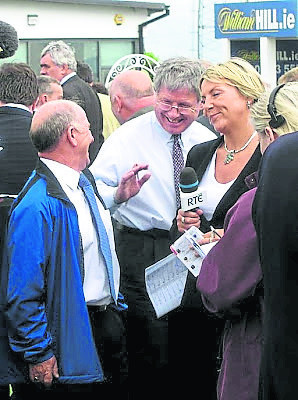 For the majority of trainers based on the Curragh, and further beyond, the presence of the Old Vic gallop has been pivotal in their day-to-day operations.

Damien recalls of how the Old Vic gallop came about. “Old Vic’s legacy is the gallop up the Curragh. He’d won the French Derby and after he won the Irish Derby under Steve Cauthen, Sheikh Mohammad donated the prize money to build a proper gallop in the Curragh and gave the rest to local charities. Old Vic was so popular because of what the Sheikh did.”

Dermot Weld had to wait longer than he would have wanted to win his home Derby. He’s now won three and Damien has fond memories of his first two winners in Zagreb and Grey Swallow.

“Pat Shanahan had been a wonderful work rider for years and was on board Zagreb and he had his day in the sun but he was basically a flukey winner.

“Grey Swallow was a different story, however, because he was reputedly prepped for the Irish Derby in a gallop up the Old Vic. Pat Shanahan rode him and Pat Smullen rode Vinnie Roe and they pulled up at the top of the Curragh and Dermot said to Pat Shanahan, “Well, what do you think of that?” He replied, “He’ll win the Derby, Boss.” I don’t think Dermot would deny that.”

The Irish Derby has been dominated in recent years by the home team but it wasn’t that long ago when we struggled to land a blow in our biggest Classic.

“For years, we were the poor boy in the Curragh and then suddenly we started to monopolise it. England won six in a row from 1986 and we were in therapy.

“One of those winners was Sir Harry Lewis in 1987. And that day, you wouldn’t put out a milk bottle. It teemed rain all day and Sir Harry Lewis ploughed through the mud to win it impressively.

“That day was one of the worst days you could go out.”

It’s safe to say that Budweiser is probably the most renowned sponsor of the Irish Derby.

Damien remembers, though, why the huge American-owned company isn’t associated with the great race anymore.

“The story with Budweiser was that the Americans thought the Irish Derby was being run in a field in Ireland because the camera was on the near side of the track. It looked like they were in a field and there was no crowd because everything was being filmed from the stand, unlike the Kentucky Derby, where there was 120,000 in the stand and they film it from the infield.

“That was one of the reasons why Budweiser gave up on it. The year Camelot won the Irish Derby, I watched it from the infield and it looked completely different with the crowd in the background.”

Damien has been reminiscing for 15 minutes now and we’re only getting around to the Aidan O’Brien years.

A total of 11 different Irish Derby winners to choose from, but Damien is in no doubt as to which was his best.

“Galileo was the one. High Chaparral was hard as nails, tough as teeth, but Galileo was probably the best balanced racehorse I’ve ever seen. He went around Epsom like it was a billiard table. He was just the perfect racehorse. Aidan’s best was Galileo for sure.”

There’s something very special about going down memory lane with somebody with such an exceptional sporting brain.

In Damien McElroy, Naas have got somebody extremely unique.

And if he ever publishes a book on his racing stories, it would undoubtedly be a best seller.