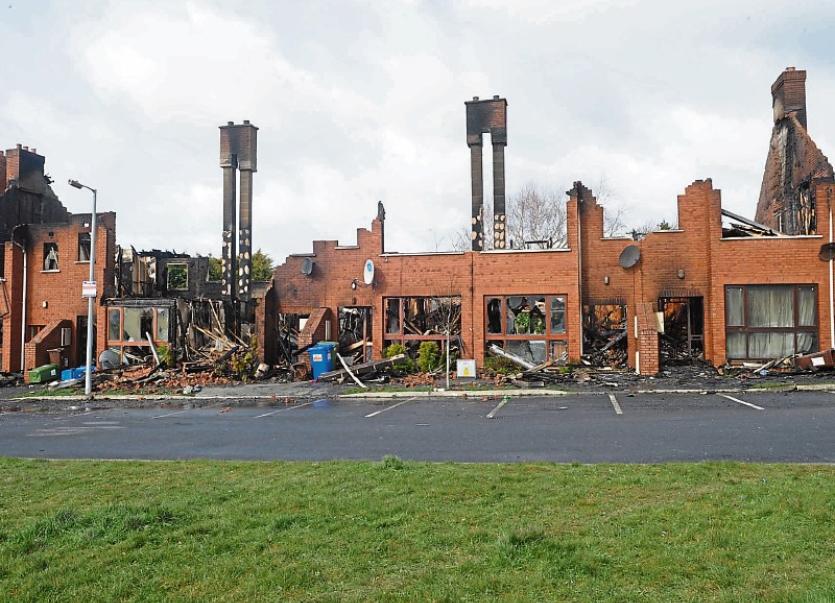 File photo: The Millfield Manor homes, which were gutted by fire in minutes in April 2015

A Kildare councillor has called for the release of a government report on the Millfield Manor fire, where a blaze gutted six Newbridge homes within fifteen minutes in 2015.

“The people of Grenfell do not have the luxury of hindsight, we do. We need to see the report and take action,” said Cllr Joanne Pender (Ind).

“The residents have the right to know they are living in safety.”

He said he knew of one household at the Millfield Manor estate, where a little child checks the sockets to make sure everything is plugged out before she goes to bed, in case a fire starts.

Cllr Pender told this morning’s Kildare Newbridge Municipal District meeting she had submitted the Millfield motion prior to the Grenfell Tower disaster.

She sympathised with the families and all those affected by the blaze at the council tower block in London. She said she hoped those responsible would be held accountable.

She stressed that light touch regulation in relation to fire safety had been going on in Ireland during the boom years.

“They say there should be one hour’s resistance for each house, yet six houses went up in flames in minutes at Millfield. It beggars belief,” she said.

This review was carried out by an independent fire safety expert to develop a framework for general application and the Newbridge estate was to be used as a case study.

Cllr Pender said she had been trying to get a copy of the report for some time. She also asked Dep Claire Daly to raise it in the Dail, but she didn’t get a satisfactory response from the Government.

She said she had also been refused access to the document under the Freedom of Information Act and had appealed.

She was told it was now with the Attorney General’s office.

Cllr Pender pointed out the building trade was beginning to pick up again, yet no guidelines or findings in relation to timberframe homes had emerged.

She said a separate report had been commissioned by the council, which hadn’t been given to councillors, although some residents did get to view it. She said this report found there were fire safety issues with the attics of the homes.

SEE ALSO: Man found not guilty by reason of insanity for Millfield inferno in Newbridge

Cllr Pender also said other residents had paid for expert reports on their own homes.

“It’s a matter of life or death,” she explained.

She said it’s now two years on and there had been no assistance for the people living in Millfield. She said many of them had huge mortgages and their homes had been devalued, and they couldn’t afford to move.

Cllr Fiona McLoughlin Healy (FG) said; “people are really and truly living in fear, notwithstanding the obvious impact of the devaluation of their homes.”

Cllr Mark Lynch (SF) said he also asked Eoin O Broin to raise the matter in the Dail on June 20. He said the Department were refusing to publish the document and this was not acceptable.

“Do we have to wait for a Grenfell to put our foot on the pedal,” asked Cllr Pender.

All the councillors agreed that a letter would be sent to the Department requesting the report.