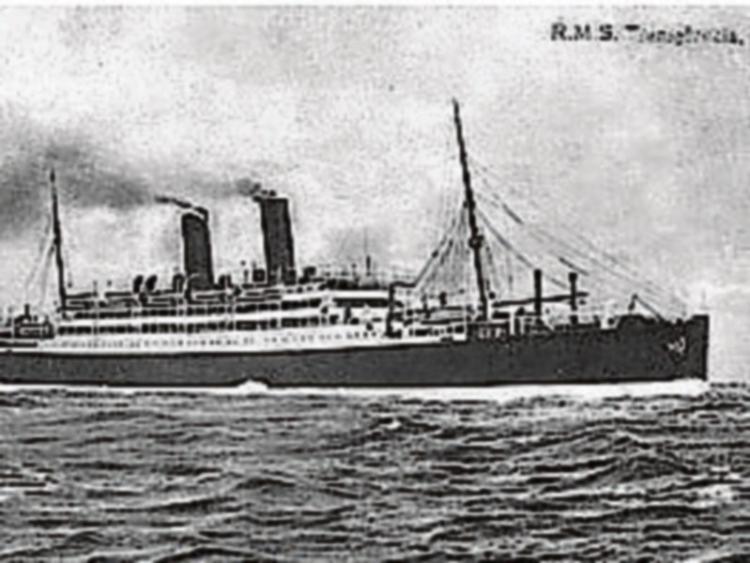 Miss P. Murphy, a military nurse attached to the Territorial Fore Nursing Staff, who is daughter of Mr. Thomas Murphy of Ballyroe, Athy, reached home this week after having a providential escape from death, the Leinster Leader reported on June 2, 1917.

She was preceding on the ill-fated transport Transylvania which was torpedoed in the Mediterranean on the 4th inst. as a result of which 29 officers, 373 soldiers Lieut S. Brenell RNR and 10 of the crew lost their lives.

Completed just before the outbreak of the First World War, the Transylvania was taken over for service as a troopship.

Commissioned for service just two years before she sank, she was designed to carry 200 officers and 2,860 men, as well as the crew.

The ship was full when she set off from Marseille bound for Alexandria on May 3, 1917.

Ms Murphy tells a thrilling story of the attack and the subsequent exploits that followed the sinking of this fine vessel. The ship was only one night out from port. About 10 o’clock on the morning, the liner was stuck with a torpedo and the engine rooms smashed.

She began to list and when struck with a second torpedo began to sink.

The boats were lowered and the greatest order prevailed. Life belts had been served to each person.

The sea was rough and some of the life boats were smashed but the occupants were picked up as far as it was possible by other boats. But for the very rough sea that was running, more lives would have been saved.

All the nursing staff were saved and the soldiers, despite the awful fight they were having for their lives, sang, and were in no way down-hearted.

The position of the survivors was made all the more precarious by the plight in which they were, when in the boats.

In the boat in which Miss Murphy was, it was discovered that someone had interfered and removed three of the row locks, leaving them helpless.

As a result, the boat was soon filled with sea water which eventually swamped it, despite the efforts of the occupants to keep it bailed with the aid of hats and other articles. All on board lost all their belongings.

After the swamping of the boat it was a case of everyone for themselves, and after floating for three hours they were rescued by one of the escorting destroyers.

On arrival some of the rescued presented a weird appearance, one man wearing a Turkish fez, a kilt and white shoes. The captain of the ship was rescued but died from the effects of the ordeal he underwent the day after arrival.

Many of the survivors swam to the land, nearly nine miles from where the ship sank.