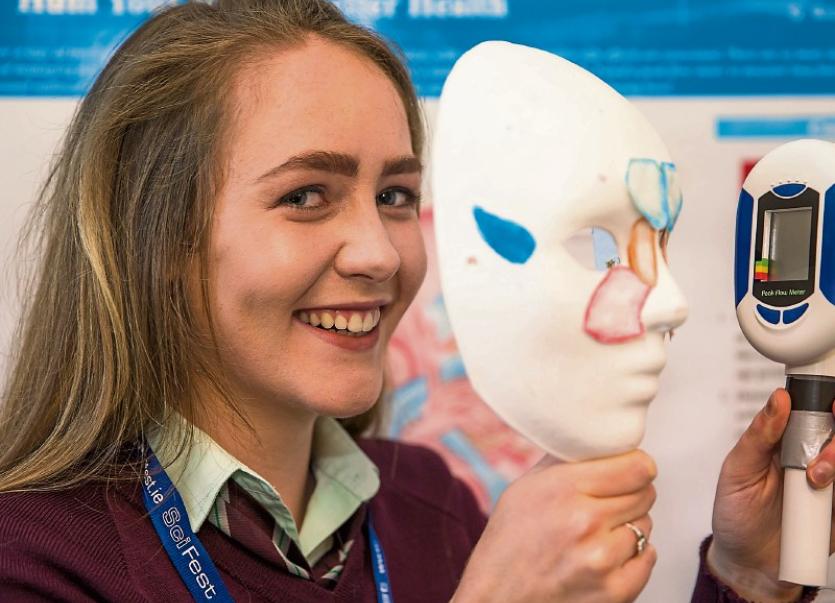 A Kildare student will represent Ireland at a major international science competition in the USA next week.

SciFest national champion, Caolann Brady, from Donadea, who sits her Leaving Certificate this year at St. Wolstan’s Community School, Celbridge, will represent Ireland at ISEF 2017, which will be held in Los Angeles California next week.

This Saturday, Caolann (17) will head off for a week to the Intel ISEF, an international pre-college science competition, involving some 1,700 students from over 75 countries competing for a prize fund totalling $4million.

Caolann, daughter of Vanessa and Niall, and sister of Odhran (15) and Fionnan (13), secured her Los Angeles place when she won the top award, the Science Foundation Ireland Intel ISEF award, at the SciFest 2016 national final last November.

Her project focussed on the natural treatment of asthma through humming and breathing techniques.

Caolann was born with asthma and has suffered many asthma attacks which were treated by nebulisers.  This led to her award-winning project ‘Hum your way to better health,” which found that the prescribed humming technique improves lung function across a range of ages, genders and breathing capabilities by an average of 10%.

Research has shown that the ventilation of the paranasal sinuses (inhaling and exhaling) increases greatly when a person practised specifically defined humming techniques.

Caolann set about exploring whether this was true or not by conducting a series of experiments with 175 participants.

She told the Leader, however,, that she did not have a lot of help from the pharmaceutical industry and believes there could be some fear that the technique she researched could lead to reduced sales for pharma companies.

Along with a few other Irish students, and St Wolstan’s teacher, Karen O’Callaghan, heading to LA with her, she will know her fate, prize wise, on Friday week, after judging on Wednesday, May 17. “I am not really expecting too much,” said Caolann, who wants to study medicine, subject to her Leaving Cert results.

Caolann said she was looking forward to California and showing her work to some of the top STEM professionals in the world. She said she was  grateful to her family, friends, teachers and everyone at SciFest who have supported her.

After the Leaving Cert, she will be “lazing around” for a bit before heading to the Gaeltacht, where she has been a regular in recent years. Caolann is almost fluent in Irish.

Apart from the trip expenses being paid, there is around €400 spending money for the week.

SciFest CEO, Sheila Porter said they are very proud of Caolann and her study. “I am sure she will enjoy it hugely. SciFest is all about encouraging a love of science, technology, engineering and maths among young people and Caolann really embodies all of this. I look forward to seeing what she will achieve in the coming weeks, months and years.”