Over 30 members of Kildare army families protest at Curragh today 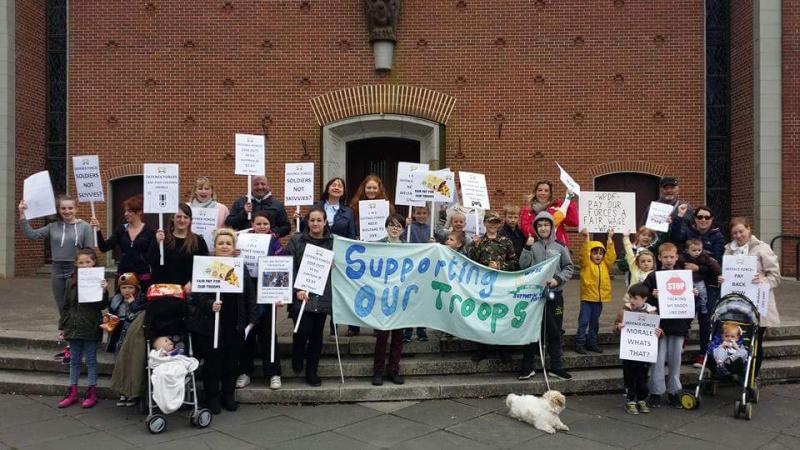 Over 30 members of army families took part in a protest at the Curragh Camp today as part of a national movement pushing for better pay and conditions for members of the Defence Forces.

Several other peaceful protests were organised by the Wives & Partners of the Defence Forces (WPDF) at barracks across the country.

Cllr Joanne Pender was present at the protest.

“Having grown up in the military training camp in the Curragh, my father and all of the fathers of my friends, neighbours and schoolmates were soldiers. It was always seen to be a good, steady, reliable and fair paid job that people were very proud to hold. That is no longer the case,” she said.

“Over the years with cuts to pay, short five year contracts and outsourcing of services within the Defence Forces, this is no longer a viable career choice because the pay is so low that 20% of workers need social welfare supports just to meet an acceptable level of income in order to have a fair standard of living. This is intolerable and must be changed.”

She said there is now way a newly trained private cannot afford rent, a mortgage, childcare costs, or basically live a decent quality of life other than to merely exist today, let alone plan for tomorrow on €351.61 per week.

“At these rates this is not a living wage and it does not pay them to go to work,” she added.

“In the early 1990's there were about 14,000 military personnel, during the recession the defence forces allowed conditions to stagnate, didn't recruit personnel and allowed natural wastage to bring down costs to the exchequer.

“Now they are in the middle of huge recruitment drive again but there is no longer any incentive for young people to sign up.”

The Independent councillor said that according to PDFORRA, thousands of members have left because they can't afford to live on the low pay.

“Paul Kehoe Defence Minister wants to increase the number of personnel to 9,500 but no matter what glossy advertisements they put out or how exciting and enticing a career they make it look like, current members joining the defence forces are not paid enough to live on.

“Some of the positions such as Naval Based operations are paid well below minimum wage for the hours they work. They need pay restoration and they need a decent wage if they want those jobs filled.”

Cllr Pender said morale is low, pay is low and people’s human rights are being violated under Article 11 (freedom of assembly and association) of the European Convention on Human Rights by not allowing them to take part in industrial action to fight for better pay and terms and conditions of work, by not allowing access to the states collective bargaining mechanisms or to join a trade union.

“PDFORRA should be reconstituted as a union and allowed freedom of association, to be a part of ICTU (The Irish Congress of Trade Unions), so that they can negotiate the protection and improvements of pay and conditions for the workers as a priority,” said.