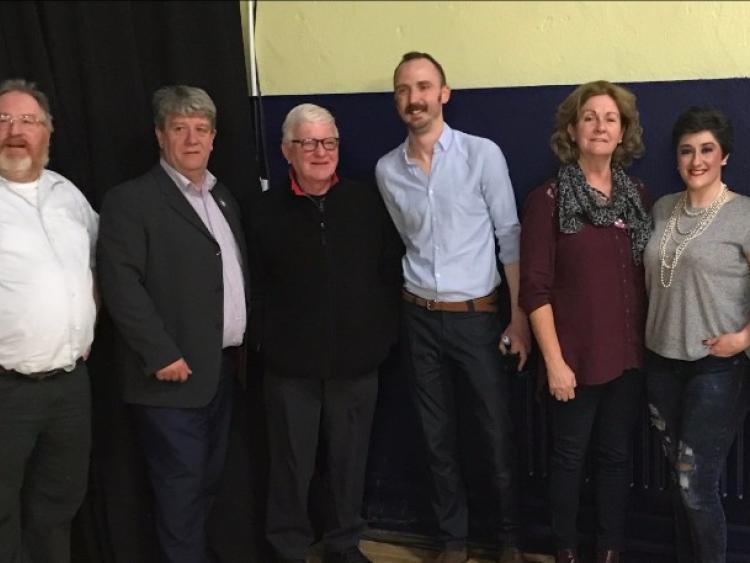 Last night, I had the pleasure of attending the opening night of the Silken Thomas Player’s revival of "The Hostage" by Brendan Behan.

The play was first produced by them 23 years ago under the direction of the late Sean Judge.

To say I was immersed into “nostalgic remembrance” is an understatement. Having played in the original production it was a pleasure to meet with some of the original cast members, Ber Rochford, Simon Hickey and Liam Quinlavin, and experience this show with them.

All of us now either “Too old to play the young ones or too young to play the auld ones” – a phrase coined by me in the box office earlier tonight, and effortlessly stolen by the Chair of the Silken Thomas Players, Mark Stafford in his opening introduction, albeit more eloquently delivered; noted Mr. Stafford.

From the opening calamity to the closing surrealism, this show kept our interest throughout. Under the strong and well-crafted direction and leadership of Liam Quinlavin, this cast weaved Behan’s story in the true manor in which it was written.

From the opening scene the characters moved smoothly and effortless about the stage establishing the truly magnificent mayhem that is “The Hostage” and at times displaying perfect tableaus on the dingy and scruffy “whore house” set.

A suitably decorated box set making use of every inch of available space on this limited stage and in all scenes serving as a functional living part of the story. Lighting was sufficient with subtly lighting changes used at times to point some monologues.

The costumes were ideal, highlight’s were Charlotte’s teddy, Megs House coat and of course the IRA men. Not so sure about Theresa’s Hair that tended to distract at times particularly when she “rolled out of the scratcher”.

The props were used effortlessly throughout the show, including all the drinking of the stout and the tea.  I especially liked the fluid movement of prop sharing and use of props by the actors to emphasis text, for example the stick, the bagpipes, bottles and tea cups.

The actors bar none absolutely embraced the essence of what Behan had scripted, a boisterous band of rebels and whores. The entire cast worked very well as an ensemble and were very generous to each other on stage.

Evidence of strong direction and stage positioning throughout the performance highlighted the story telling and helped the finely tuned pace of the show.  Performances that stood out to me tonight were Mick Conlan (Pat), Vicky Byrne (Meg), Catriona Maher Ures (Miss Gilchrist) and of course scene stealer Ber Nolan (Collette ‘The Whore’)

Over all, I would highly recommend that you grab your tickets, your bottle of stout, your 20 sweet Afton and stagger down to the Silken Thomas Player’s boisterous and rebellious presentation of Brendan Behan’s ‘The Hostage’ a night of laughing and pure enjoyment not to be missed.

The group have certainly consumed the elixir that has catapulted them right back to the ‘old days’ of the Silken Thomas Players and indeed leaving me among many other in a standing ovation tonight.

The Silken Thomas Players are staging “The Hostage” at the CMWS in Kildare Town until April 22.