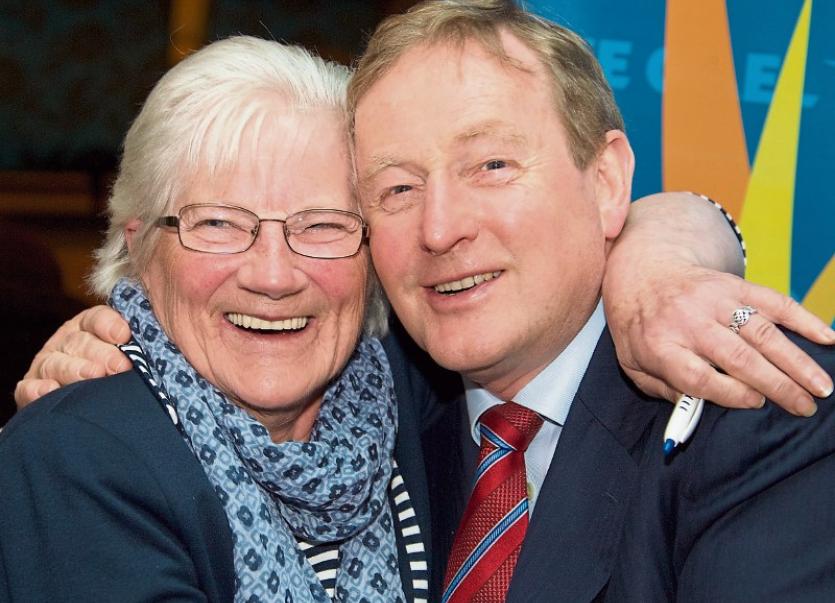 Teresa Byrne from Leixlip with Taoiseach, Enda Kenny at the Westgrove Hotel in Clane

IT may take a lot longer than people think to get Brexit negotiated, Taoiseach, Enda Kenny told a Fine Gael organised meet on Brexit at the Westgrove Hotel in Clane on April 10.

There will be uncertainties  in Brexit but there will be advantages, he said, at a meeting chaired by TD, Bernard Durkan.

Mr Kenny also said that Ireland also had to look beyond Brexit to the EU agenda to bring peace and economic stability, not only to Europe but other parts of the world.

He said Ireland had to develop commercial space, build new houses, motorways, improve broadband etc. He said a €42 billion fund was not enough. “The European Investment Bank will provide serious investment projects provided there are income stream for example a motorway toll from Limerick to Cork.”

He cited example of Athlone eduction public private partnership, where schools are built with private funding.

The EU has agenda beyond Brexit, he said. “There are currently forty wars around the world but none in Europe. “We have that peace and young generations do not live in fear.”

The EU plan is to have young people be able to live and work in their own countries, if they wish, he said.

He also said Europe must have an agenda to deal with others - by going and helping them. “You have to look beyond Brexit.”

Of Brexit talks, Mr Kenny said: “We are staying with the EU and negotiating Brexit with 27 other countries. Rather than 27 in the room, you get a task force to deal with all the issues in the negotiations and refer them to the European Council to make the decision at the end of the day.”

Gerry McCormack, from Siptu, said a lot of workers will suffer from Brexit.

“People who have to go across the border in white vans to work will suffer. “We would ask for social dialogue needs to be put in place not social partnership.”

Matt Dempsey, former editor of the Farmers Journal, said that economic history had shown following the 1947 act that Britain got cheap food from world markets while protecting its own farmers from competition.

He predicted that the single farm payment to farmers in the UK will be replaced by environmental taxes.

Maynooth University Professor, John O’Brennan, said that Ireland could gain education wise with many EU citizens and Erasmus student currently in the UK seeking security and work within the EU.

He said it is “incredibly irresponsible” to suggest that Ireland leaves the EU.

But he also said that Brexit could provide accommodation challenges for Kildare and Ireland. Citing the Erasmus student programme, he said Maynooth University had to send foreign students out of Kildare to Mullingar, Lucan and Central Dublin to find accommodation.

Professor O’Brennan said that if Le Pen wins in France, the EU will face an “existential crisis.”

MEP, Mairead McGuinness, said and the Taoiseach agreed, that fishing would be a major bone of contention with Brexit as 60% of the Irish catch is in UK waters and others have quotas in UK waters. “Fishery meetings have been the most difficult areas,” she said

Kildare South TD, Martin Heydon, said the EU had been set up to achieve peace.