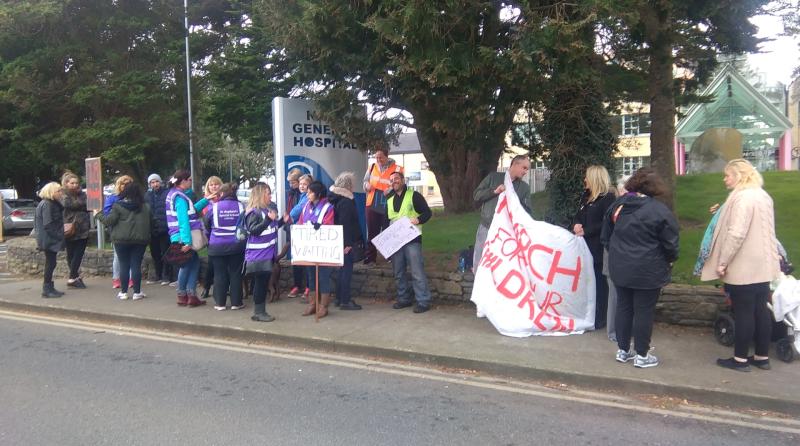 They are angry over delays experienced by children with special needs.

The protestors, who marched from the hospital to the Vista building on the Ballymore Road, want the Health Service Executive to recruit more staff so that assessments can be carried out and assistance provided within a reasonable timeframe.

“There are a lot of kids with special needs across the county. Some. like my four year old nephew, have been waiting for an assessment for 30 months, said Newhall resident Amanda Clarke, one of the organisers.

Ms Clarke added: “This is vital for kids because vital time is lost in terms of their development and the assessment can decide whether a Special Needs Assistant is needed for the school that the child will attend.”

The parents say there is a shortage of occupational therapists, speech and language therapists, psychologists and counsellors. It’s estimated that there are more than 8,000 people, including adults on waiting lists.

Another protester Chris Pender from  Newbridge  said his brother James, who needed assistance, following an accident had waited for many months to be assessed only to find that, once that was done, the actual services were spread too thin.

“In the end  he got help for about two years  but this dried up and we had to try to arrange it privately, “said Mr. Pender.

Fianna Fail TD James Lawless said many families have had traumatic experiences because of the delays.

“It’s hard enough for many of them to even take part in a protest given the pressures on their time. He said there is a shortage of personnel trained in providing special needs care and carrying out assessments.”

He criticised the Government for being slow to adopt the United Nations  Convention on the Rights of Persons with disabilities. Once this is done, the State will obliged to act, said Dep. Lawless.