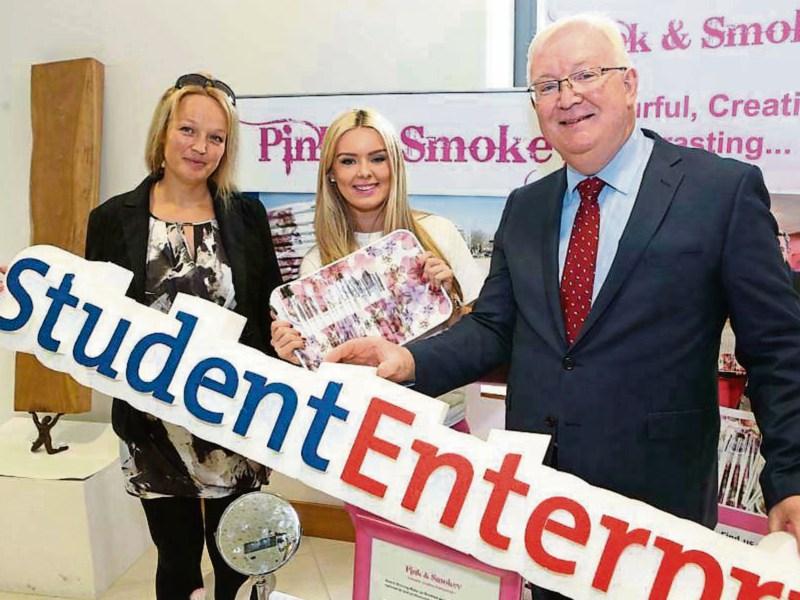 Niamh O'Donnell (centre) with one of her awards

A 19 year-old Kildare student is taking on a four day charity business challenge to trade an orange for the highest value goods she can.

It’s just one day in, and Niamh O’Donnell from Athgarvan has already swapped her orange for a teddy, two designer handbags, a real snake skin belt, a GHD from Neeba Hair Salon, a Harry Potter book, make up and some vouchers.

“The deadline is Monday (March 27) at 5pm and all the items will be auctioned in aid of the Irish Guide Dog Association. It’s such a good charity and I really want the title, but it all for such a good cause,” said the former Newbridge College student.

The 19 year-old is one of 30 DCU students chosen to participate in the university’s “Best Salesperson” competition sponsored by the Jameson International Graduate Programme.

Currently studying International Business and French student, Niamh is no stranger to success.

From the age of five, she showed a talent for making deals.

“I loved drawing and I used to draw pictures and go around my estate trying to sell them to my neighbours. They would give me a euro for my paintings. I’ve always had a flair for business,” she laughed.

The daughter of Muriel and Paul O’Donnell, Niamh attended primary school in Athgarvan before going on to Newbridge College.

“My product was my own-set of makeup brushes with my own branding made from high quality materials that rivaled big brands like MAC,” she said.

Due to her success, she featured on television on Morning Edition, Nationwide, had radio interviews with KFM and RTE as well as appearing in numerous newspapers and magazines. Her products were sold in ten salons across Ireland and her online market even stretched as far as Tunisia.

Due to her college committments, Niamh has put her business on hold, but plans to return at some stage.

“Recently I've been chosen to compete in a competition in DCU to find DCU's Best Salesperson. This is a competition based off the guy who traded his way up from a paper clip to a house,” she explained.

Niamh said she would love to talk business with anyone who wants to get involved in the challenge.

“I'd love to have the opportunity to come on air and trade with any business, or create a bit of buzz/publicity about the competition,” she added.

She can be contacted at 087 6615795, by emailing niamh.odonnell29@mail.dcu.ie or tweeting @niamhalious