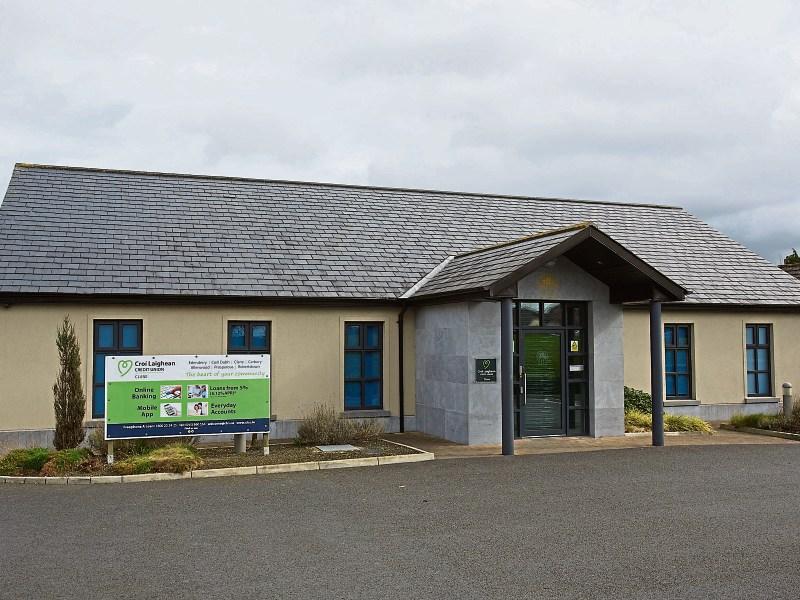 Communities in Clane, Coill Dubh and Edenderry are invited to the official opening of Croi Laighean Credit Union tomorrow with stilt walkers, jugglers, face painters, balloon modellers and lots of spot prizes to give away.

The new entity is launching its brand tomorrow, with events in all of the branches and official ribbon cuttings in Edenderry and Clane, from 3pm to 5pm and then, in the evening in Coill Dubh, from 6pm to 7.30pm.

Since the amalgamation that saw Edenderry and Coill Dubh credit unions join forces officially on January 30, the newly created Croí Laighean Credit Union has seen a 25% increase in lending.

And according to CEO Paul Kennedy, there has been substantial interest in mortgages from potential house buyers.

"The three offices which we open most are Coill Dubh, Clane and Edenderry. We have just under 40 staff, 24,000 members and assets of approximately €135 million,” Mr Kennedy told the Leinster Leader at their Clane offices last week.

He explained that the offices in Allenwood, Prosperous and Robertstown would be open on Friday mornings and evenings and Derrinturn is open Thursday, Friday and for a half day on Saturday.

“There are just less than 60,000 people living in the common bond area, so in terms of penetration we’re only at about roughly 50%,” he said, but emphasised that the new credit union is very intent on growth, and he believes the amalgamation will only help with that.

“It’s going really well,” he said. “There’s great take up from members and lending for the year is up by 25% which is brilliant. Membership is also up, by 10%.”

Speaking generally about amalgamations, Mr Kennedy felt that it was something every credit union should at this stage have considered as a result of increasing costs, and the need for more staff in order to compete against other financial institutions.

“So from day one, we were built for growth. The whole idea of coming together was to grow that 50%, to penetrate the market more and to connect more with our members — and it’s only with a larger capital base, with larger reserves and larger member shares that you can provide more services.”

This particular amalgamation made sense, he feels.

“Our common bonds fit. They’re side by side and it’s one of the first amalgamations where the two are of a similar size, so there was no dominant partner.

“And in fairness, from day one, we approached it so that everybody would have a say,” he said. “So representation across the board is equal.”

Both areas, he noted, have a similar type profile — it’s largely rural.

“We’re very keen to let people know that we are open for business in terms of personal lending, mortgages, businesses. It’s the only way we can actually grow.”

He noted that many other financial institutions are focusing more and more on the technology of banking,
favouring machines over people behind the counter, and losing, perhaps, the personal touch.

This was something that he saw as an asset for Croí Laighean.

“You come in, make an appointment, speak to people at the counter, speak to lending officers. There’s one at every one of the branches.

“We have online accounts, and an app — and that suits certain people — but it doesn’t suit everybody. With loan applications, no matter who they are, everybody can come in and tell you their story.

“If you look at our common bond area and you go onto Daft.ie you’ll see that you can buy a home for what some people used to pay for a car — and people are very happy about that. And it looks like there will be a good mortgage market for Croí Laighean.

“We had some market research done for the business case we had to make to the Central Bank, which found that the cost of a mortgage for any given house in our common bond area was a fraction of the perceived cost to rent it — and the mortgage was affordable.

“The Central Bank rules are so strict, for credit unions and banks. You can only borrow a multiple of your income anyway, and you have to have a certain amount of loan to value. So realistically if your numbers don’t stack, it doesn’t matter what financial institution you go to, it just won’t work.

“I can tell you that since Croí Laighean started on January 30, we’ve had a lot of applications,” he explained.

And it’s not a credit union personal loan, it’s a mortgage.

“A good thing to bear in mind is that if you have a mortgage with Croí Laighean, and you come across some additional money, you can pay off more of the mortgage with no penalties.

“It’s not good for us,” he admitted, “but for the member it’s good — and it makes credit union mortgages all the more attractive.”

Speaking of the process of the amalgamation, he confirmed that the two credit unions had to make a business case to the Central Bank.

There are very stringent rules and we had to show how it would work,” which, he agrees, is reassuring for members.

“Uniquely in Edenderry, we had actually published our strategic plan, so that people know what what we said we were going to do, we would do, which will certainly look to do again.

“You should not be holding back what you’re planning to do from your members.”

As regards future amalgamations, Mr Kennedy says that Croí Laighean may look at it again in the future, but emphasised that they were in no rush and it would have to be a suitable fit for Croí Laighean.

“There’s no point in talking about providing services if you don’t have the people to serve people, and people cost money,” he said — which is where amalgamations can help.

In terms of a general overview of the economy, he agreed that we’re seeing growth, albeit slow.

“I think last year was a defining year for a number of credit unions, and if you looking at some annual reports, you will see most credit unions who are trying to be active are achieving growth.

“People are starting to borrow again, no more than you’ll see with cars or home improvements or travel.”

Speaking of cars, he noted that a lot of people are being swayed by PCP deals.

While he saw that they were attractive to some people, with restrictions on mileage and what the customer gets back at the end, they may not suit everyone.

“It’s very easy to put in a repayment every month, but when you add up the cost a credit union loan is that much cheaper.”