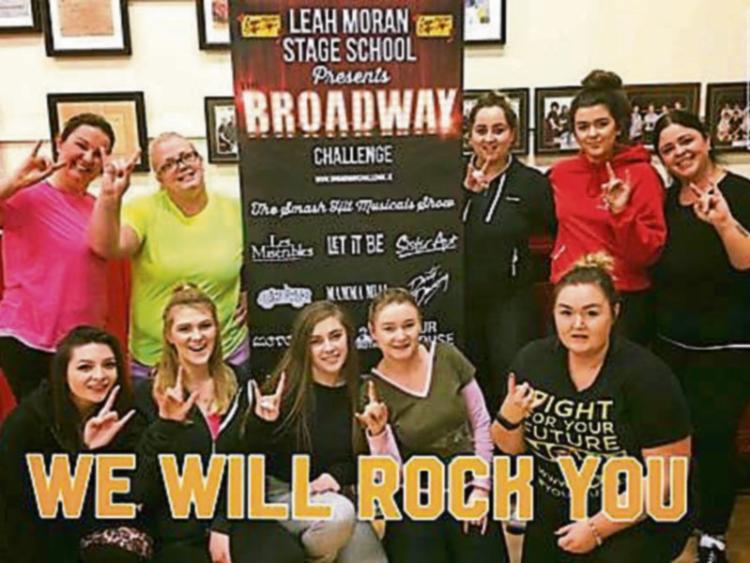 One of the ten teams set to perform tomorrow night

Leah Moran's Stage School is hosting a show with a difference tomorrow night, with the parents taking the spot light for a change.

The Killashee House Hotel in Naas is the venue for the Broadway Challenge this Saturday night.

“We are running it as a fund raiser to raise money for the shows we are holding in the Olympia Theatre next May for the children. We celebrated our 10-year anniversary last year and we normally run our shows in the summer, so the Olympia shows are to mark that milestone, ” said Leah.

She said she wanted to keep the Olympia ticket costs down for those who wanted to attend the four shows on May 27 and 28, as well as funding the production itself.

Leah has been really impressed with the parents' talent, who are getting set to take the stage tomorrow.

There will be a panel of judges to assess the performances, which will each encompass a five minute segment from well known toe tapping musicals.

“The parents have worked so hard. We meet them once a week for two hours and then they have been rehearsing themselves,” she said.

Leah pointed out the show has given her an opportunity to get to know the parents a bit better because normally, she is coaching their children.

When the Newbridge woman set up her stage school over ten years ago, little did she realise how successful it would be.

Many of her former students have gone on to have a career in the performing arts with two girls currently studying Musical Theatre in London, and some students opting to stay closer to home in Dublin to continue their studies.

In fact, just recently a group of her proteges traveled to Dublin to audition for work aboard the Oscar Wild cruise ship.

Leah has been bowled over by the support the school has received.

“The local businesses have been so good. We really are so grateful to everyone who has supported us. We have to fund raise to hold the shows and without them, there would be no Olympia.

“The parents have also been fantastic. They are doing something which is totally out of their comfort zone,” she said.

There are still some tickets left for tomorrow night. They can be bought from any of the parents involved or any member of the Stage Academy. The show will be followed by a live band and a DJ at the Naas hotel.