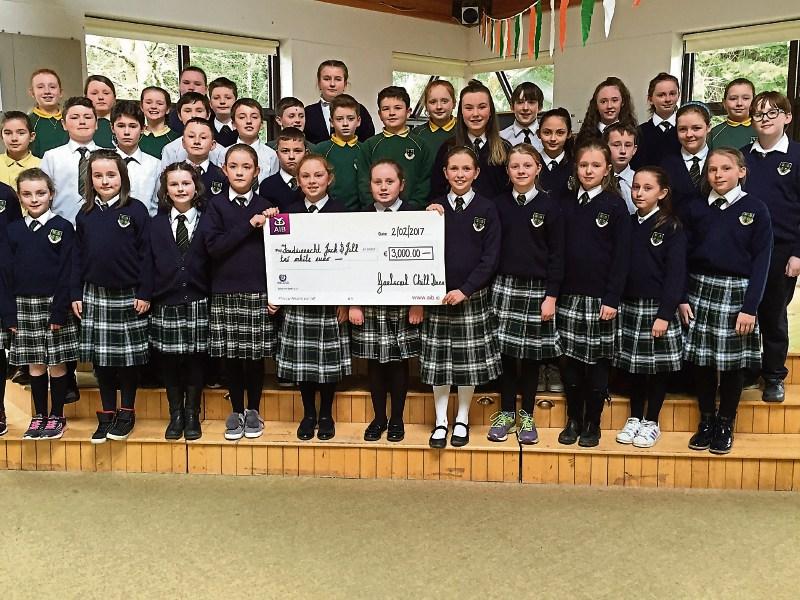 The Newbridge Gael Scoil Chill Dara have raised a fantastic €3,000 for the Jack and Jill Foundations from the proceeds of their CD.

The choir, which is based at the school on the Green Road, was delighted to present Hugo Jellett, CEO of the Jack and Jill foundation with the cheque last week.

The funds were raised by the children of Gael Scoil Chill Dara as part of their social entrepreneurship endeavours: children helping children.

Part-funded by a recording bursary from Kildare County Arts Service, and drawing on the additional talents of some of Kildare's best loved musicians, the school choir recorded an Irish-language CD, "Ding Dong Dedero", on behalf of Jack and Jill.

The CD features some of the most famous Irish songs and music, performed by The Nás na Rí Singers, In Caelo choir, Frankie Lane, Conor Mahony, Ruth O'Hara as well as almost every pupil from Gael Scoil Chill Dara, and the school choir.

The first tranche of CDs raised €3,000 during December 2016. The CD will be on sale again in December 2017, but is currently available from the office at Gael Scoil Chill Dara, to celebrate Seachtain na Gaeilge and St Patrick's Day.

The choir of Gael Scoil Chill Dara was founded in November 2014 and has sung with the Dublin Gospel Choir. It took first place in the Irish language choral class at the Kilkenny Music Festival 2016, and performs frequently during the school year.

The Jack and Jill Foundation is Ireland's only charity specialising in providing home-nursing care to brain injured children across Ireland, including more than a dozen in Co Kildare at this moment.

The money raised by the CD project will fund almost two hundred hours of respite home-nursing care for some of Ireland's sickest children.