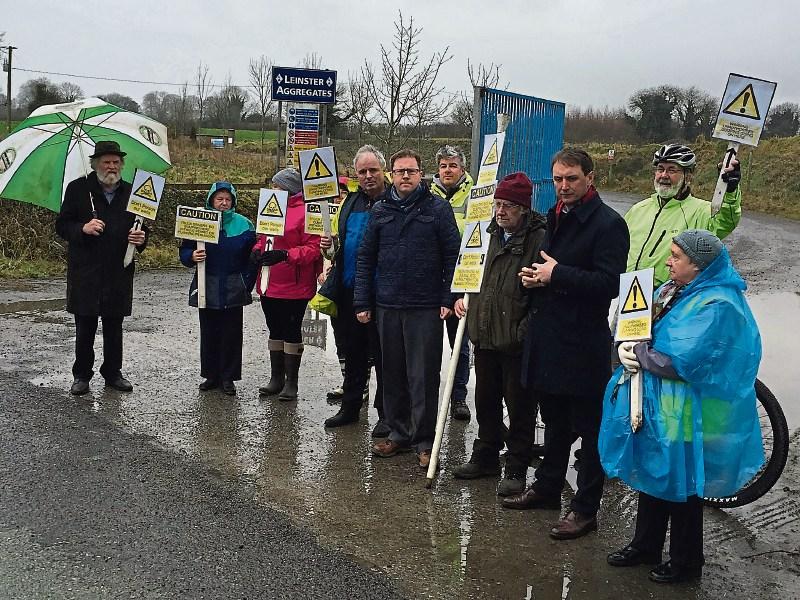 The High Court has today made an order preventing protesters from obstructing access to and from the site of a former quarry in Co. Kildare.

Mr Justice Paul Gilligan granted GCHL Ltd a temporary injunction preventing protesters from blocking, obstructing or impeding access to and from a premises it owns at Ballinderry, Carbury in Co Kildare.

The company claimed the protests, which commenced last Thursday, have resulted in the site having to be shut down. The site contains a quarry pit, which is currently undergoing remediation. However the court heard local landowners believe the works are damaging the lands and affecting local groundwater, and have blockaded the site.

Seeking the orders Matthew Jolley Bl for the company said its activities are lawful, and the protesters are acting unlawfully.

“Their actions in blocking the entrance to the site has also put their protesters and others at risk of serious injury,” counsel added. He said infill is being brought onto the site and is being used to restore the site with the consent and permission of both Kildare Co Council and the Environmental Protection Agency. Counsel said the site had historically been used for the quarrying of building materials.

Commercial quarrying ended there in 2014. On foot of a court order obtained by Kildare County Council last year, the company had been taking steps since December to restore the site to natural use. To do this the company was using lorries to transport in infill, as well as carrying out geo landscaping. Counsel said testing carried out on the site has shown that fears about the land being damaged are unfounded.

Mr Justice Gilligan said he was satisfied to grant an injunction preventing anyone from trespassing on the site, or from obstructing or blocking anyone from entering or leaving the site, The interim injunction applies to anyone who has notice of the making of the order, the Judge said. He adjourned the matter to Friday.