Surprise as quantity of materials given retailer free recycling policy 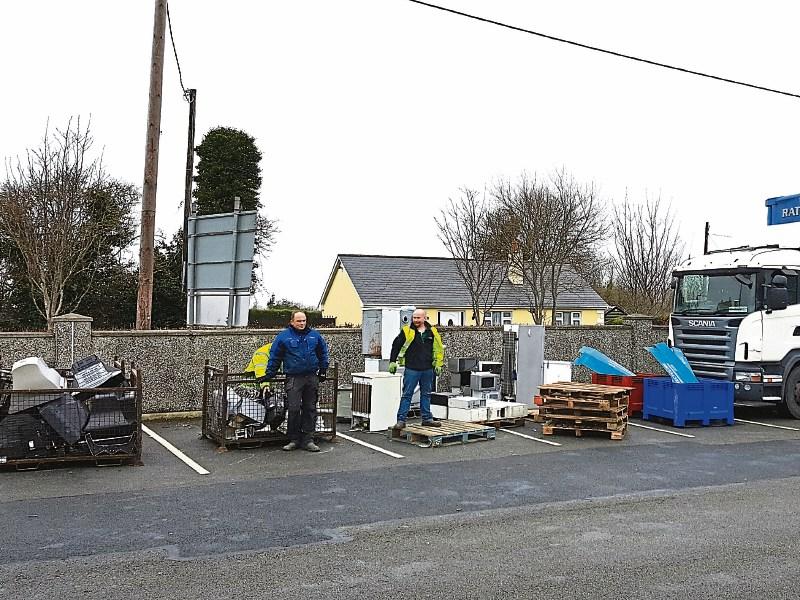 FLAT screens are starting to appear in electrical waste, according to the volunteers who run the Leixlip public recycling project.

One recent Saturday two lorry loads of material were taken away from Confey GAA following the WEE assisted recycling scheme.

Volunteer, Denis McCarthy, a former Leixlip Town Councillor, said they are arranging for 28 tonnes a year to be taken away from the town’s households.

On Saturday, February 25, the group had around ten volunteers on hand to help load up the lorries between 10.00-15.00.

The Confey GAA pick up was the first of the year. The second will be at the Wonderful Barn, probably, as before in September. “It would end up in ditches if it was not coming here,” said Denis.

With the pace of technology quickening and the dumping of the old or broken, an industrial historian or archaeologist’s could learn a lot from what is coming.

“We taught all of the big long televisions would be gone by now. We are still get some monstrous ones,” said Denis.

Not so. Perhaps it was just the right time for the householder.

With old fridges, some of them came with grass growing out of them, suggesting an extended holiday in the back yard.

You might not think the relatively new flat televisions would be turning up but event even the big flat ones, have been coming,” said Denis.

Cllr Anthony Larkin said: “We are a bit surprised by the stuff coming in because the retailers take the old things back when you buy new things.”

With flat screens, we speculated as to whether this was because they had been on the market for some time or whether they are just not built to last long.

As we spoke  around 12.30, five or six cars were in the line. “Anything with a plug or a battery is welcome,” said Denis.

Cllr Larkin, said the event is organised in conjunction with the Tidy Town Association but the volunteer group looks manages the day, including traffic.

They had two lorries ready by then. Last year they underestimated and at lunch time a second lorry had to be called in.

With the sustainability and recycling the buzz word, you would think that there would be less rather than more