Gap may be reinstated 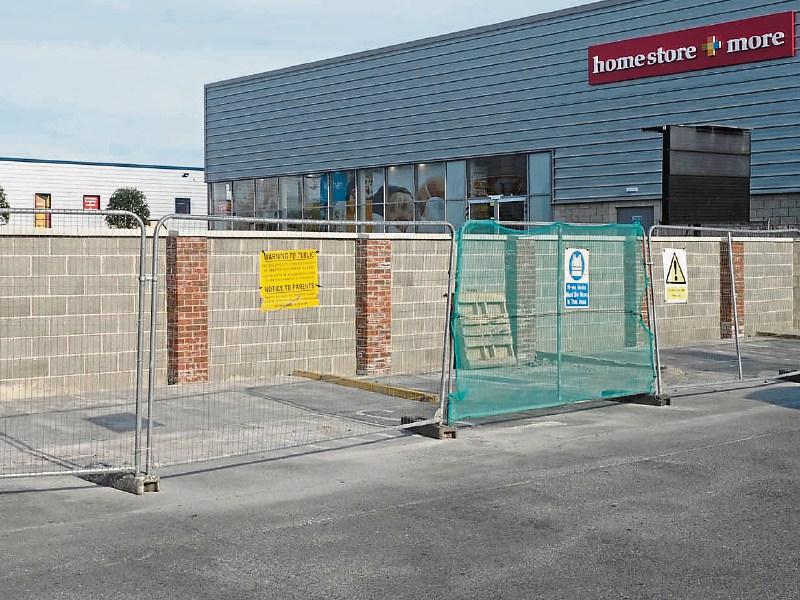 The "Great Wall of Dunnes Stores" being built

The future of Newbridge’s controversial “Great Wall of Dunnes Stores” is in jeopardy, after Kildare County Council asked the store owners to provide details of the reinstatement of the previous gap.

Last Wednesday, the local authority made the demand as part of a further information request on the proposed revamp of the Shopping Centre.

Calls had been made for the wall to be knocked down to free up access to the town centre.

The concrete block barrier caused a lot of consternation, when it was built in September 2015, just days before the neighbouring Supervalu store opened. It blocked access between the Newbridge Retail Park and the Newbridge Shopping Centre.

Cllr Paddy Kennedy made a submission on the plans, signed by his fellow Municipal District councillors.

“The structure is not in line with the local area plan and it wasn’t in existence when the plan was created,” he said.

He also called on the applicants to submit details of the reinstatement of the access point, which had been open for 14 years previously.

A facebook page was set up by some locals to campaign for the destruction of the wall.

“We welcome that Dunnes Stores are going to do a major development in the area, however we feel that the proposed development shows no linkage to the town, to Newbridge Silverware, to the businesses on the Athgarvan Road, Whitewater Shopping Centre or Newbridge Town Centre.”

“We understand from the local area plan that the Dunnes Stores site is a key opportunity site, and any development of it should show linkages with, and for the overall town.”

They continued; “Since they built the wall, traffic congestion has caused major disturbances for local businesses and customers”

Newbridge Tidy Towns Association welcomed the redevelopment, but highlighted concerns with the landscaping plans for the project.

It also asked if the current recycling facilities will be incorporated into the plans. It said it had been assured, that the trees which were removed from the Moorefield road boundary several years ago, would be replaced as part of any new development.

One of the units within the centre, has also objected to the plans. Sterling Jewellers said it is the lease holder of Unit 7, with rights to renew the lease, and “it did not and has not agreed to be included in this proposal.”

Referring to a previous planning application, it said; “The proposal is contrary to original plans for a large supermarket with 18 shop units.”

Last Wednesday, Kildare County Council asked for further information on the proposed revamp. It also asked for changes to be made to the landscaping plans.

The plans will allow for the textile and grocery areas to expand. A new entrance is proposed in the centre of the front facade.