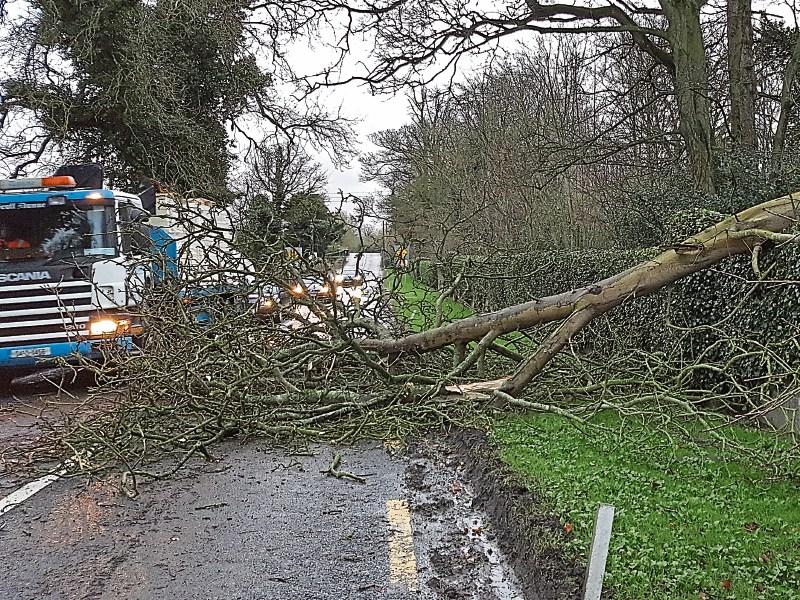 This fallen tree was pictured near the Canal Bridge on the Straffan- Kill road at about 7.45am.

As the 120 km per hour gusts of wind die down and the rain begins to ease this morning, the impact of Storm Doris is being assessed across the county.

Fallen trees hampered traffic on many roads, causing disruption for motorists on their way to work.

The Sallins road into Naas was blocked by a tree. Traffic was slowed near the Canal Bridge on the Straffan- Kill road when a tree crashed down partially blocking the road.

Another tree had also fallen further up the road.

In Rathangan, a fallen tree was reported near the Meadows estate.

Gale force winds and gusts of up to 120 km per hour were reported throughout the night and early morning. The ESB reported there are currently 46,000 customers without power across the country including Celbridge.

“Damage has been caused by high winds causing broken electricity lines and damage to poles and other equipment. Falling timber has also caused considerable damage to the electricity network,” it said.

“ESB Networks is currently assessing the damage and crews are being mobilised to restore power as quickly as possible to affected customers, once it is safe to do so.”

The ESB has warned “If you come across fallen wires or damaged electricity network, never, ever touch or approach these as they are LIVE and extremely dangerous. Please report any damage to electricity infrastructure by calling 1850 372 999 or +353 21 2382410."