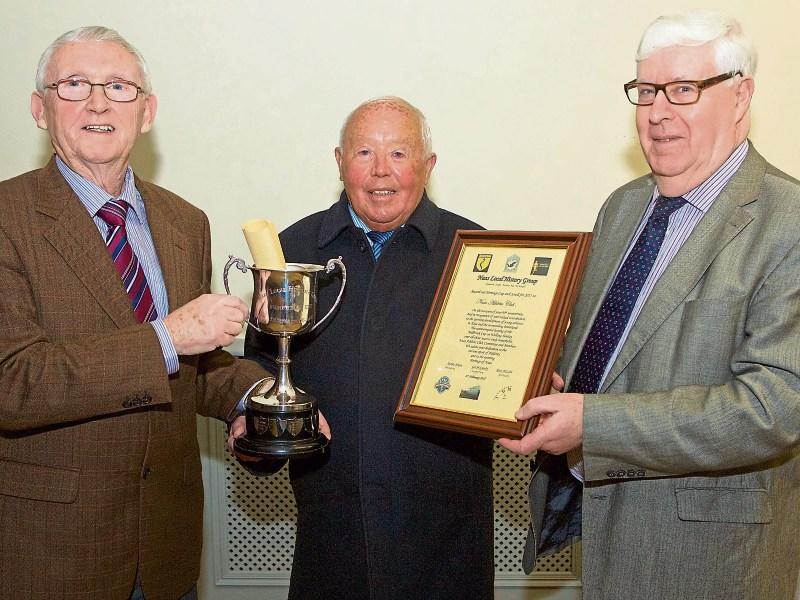 Naas Athletic Club has won the Ger Kinchella 2017 Heritage Award. It is presented by the Naas Local History Group.

The annual event is dedicated to the memory of the late Ger Kinchella, a founder member of the group which was formed in 1984.

The NLHG Heritage Cup was presented by chairperson and local historian Ger McCarthy and this was followed by the presentation of the scroll — which referred to the 90th anniversary of the club and recognised the club’s contribution to the sporting development of young athletes from Naas and the surrounding hinterland.

The club’s “uninterrupted hosting” of the Mill brook Cup on the annual Walking Sunday (the weekend preceding the Punchestown Racing Festival)” was among the reasons for the award.

NAC president Charlie Byrne accepted the award on behalf of the club.

There were also presentations by historian Stan Hickey and NAC’s Brian Mullaney. the visit by Olympic gold medalist Ronnie Delany and the Naas connection.

Many well known winners of the Millbrook Cup were remembered. These included Jack Hartigan, Ted Keegan and Jack Garvey — all three were three times winners of the six mile race around Punchestown racecourse.

Also remembered by the contribution of the Des Connolly.