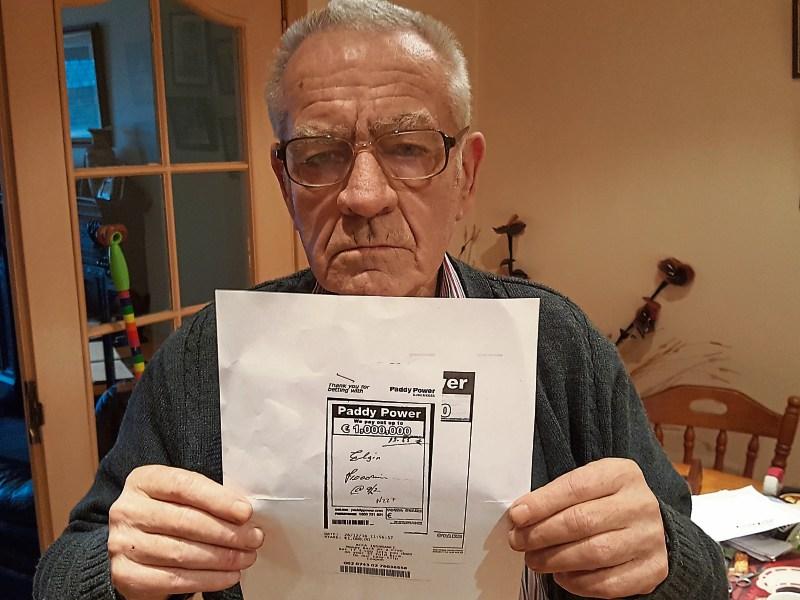 A Prosperous punter and former jockey is angry about a bet he made with Paddy Power.

John Cully, a retired 79 year old man and a native of Straffan area, believes strongly that he won €6,500 on a bet placed on St Stephen’s Day.

But, he said, after placing the bet at the Clane premises of the bookmakers, it would pay him only €6,000.

According to the betting slip he provided to the Leader, Mr Cully put a €1,000 bet on a horse called Elgin, which was running in the 12.55 race at Kempton on December 26.

He also says that the betting shop rules say nothing about taking €500 off the €6,500 he says he is morally due. If there is a rule, it is not visible, he added.

“If there was a rule they should have told me,” he said of the betting company. “I haven’t heard of the rule. Nobody belonging to me has heard of it,” he said.

He added: "The Guaranteed Price promotion can be explained as such: Paddy Power offer Best Price Guaranteed on all UK & Irish Horse Racing. So if you take a price on a horse and the Starting Price (SP) is bigger we will pay you out at the bigger odds. For example, if you take a price of 3/1 and the selection wins with an SP of 4/1, we pay you 4/1.

"So you get the best of both worlds! This is limited to €500 and the below screen is regularly displayed in all of our shops. This limit is standard across the entire industry and not exclusively to Paddy Power.”

He also said that Mr Cully could approach IBAS, which adjudicates on betting controversies, is he is unhappy.

The Leader asked the exact rule which covered the company’s ruling in Mr Cully’s case, and where it could be accessed.

Mr MacAnlomaire said: “We wouldn’t have it in our rules as it’s a promotion that can change from time to time (i.e. risk might decide one day to limit it to €250 instead of €500). It’s standard for all of our promotions to have limits (which will usually cover the vast majority of bets). It’s unfortunate that he feels aggrieved but the limit is clearly displayed in our shops.