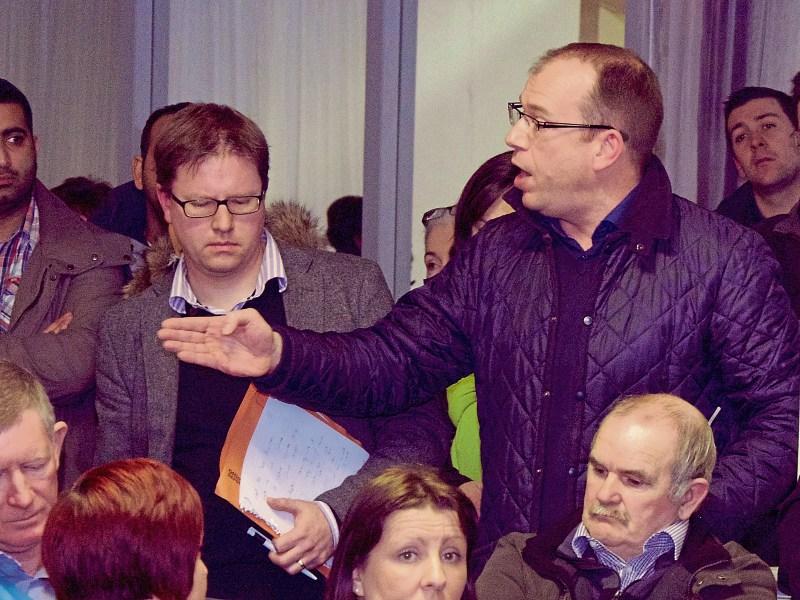 No blood was visible on the floor of the main function room in the Town House Hotel, Naas.

There were heated exchanges aplenty though, because many of those who turned up to vent their frustration came with a short fuse.

Naas Against Authority Sabotage (NAAS) set up by two town natives Mary Burke-Spratt and Chris Wilson, had morphed into a committee of eight by the night’s end.

Many more people than expected turned out and it must have a been a liberating experience for residents, who have seen business after business close as shoppers desert Naas for the out-of-town centres — pushed on their way by a lack of car park spaces.

NAAS called the meeting for the hotel’s restaurant on Friday night. But it quickly became clear it would not be big enough.

So there was a delay while the organisers waited for an unrelated event to end in the larger function room.

This room was just about big enough.

Sixty three chairs were available but probably four times that figure were needed so most of the people stood on three sides of the room.

Kildare County Council was the lightning rod for much of the criticism. Spurred into action by plans to get rid of 22 car park spaces between Swan’s on the Green and Goulding’s Hardware, NAAS’s gathering was characterised by frustration and hostility.

It was chaired by Tina O’Kelly. In the circumstances she did a fine job.

The circumstances were that it looked a tricky task to achieve some consensus in an environment where many wanted to talk, where there was criticism and counter criticism and an undercurrent of anger generated by the knowledge that Naas’s retail sector needs help.

Ms O’Kelly kept play within the sidelines and steered the proceedings to an acceptable conclusion, stressing at the outset the event was non-political.

The attendance was broadly representative of the community, but with many more town natives than the bigger non-native cohort among Naas’s population of 21,500.

There were retailers, their customers, six of the nine Naas councillors and two TDs.

They heard Ms Burke-Spratt say existing cycle lanes are not used and accused KCC of not doing enough for Naas. “The church steeple used to be the town’s landmark; now it’s the cranes in the shopping centre,” she said.

Ms Wilson said the loss of 40 car park spaces (including the Poplar Square redevelopment) will cost KCC €786,000 a year — and this will be made up by the shop owners.

The most popular politician there — and there was much criticism of the councillors who voted for the Poplar Square redevelopment — was Darren Scully, who pointed to his record of opposing the loss of car park spaces. Cllr Scully said only three councillors voted against the Poplar Road plan - him Seamie Moore and Anne Breen

Larry Swan predicted the loss of the spaces will destroy business and suggested an alternative cycle route using the Ballymore Road instead of the Kilcullen Road.

“With profits of 15c on milk, 20c on a newspaper and 5c on a scratch card you’ll need to sell a load and the footfall is not there to do this,” said Mr Swan.

He said the McAuley Place project did not initially sit well with KCC officials and it had to be fought for.

“It took a huge effort to get this through and we will need to fight like that again in Naas,” he said.

Naas Mayor Fintan Brett reminded the meeting that the councillors did not vote in favour of opening the shopping centre in Monread.

Commercial landlord Robin Skelton said new businesses will be slow to arrive unless they are incentivised by evidence of footfall and a rates reduction. People have to be convinced it makes sense to come to Naas during the day as well as at night.”

Bill Clear (Naas Tidy Towns) was the only supporter of the lanes saying that the Kilcullen Road is unsafe for cyclists, partly because of the ring road intersection. He said shops were closing when there were no cycle lanes in Naas.

There was just a little unintended humour.

When Fianna Fail TD James Lawless began to speak without identifying himself. He was interrupted by a female voice asking : “Who are you ?”

Mostly though the tone was redolent of journalist John Healy’s account of the economic decline of his native Charlestown in County Mayo.

Healy’s book , produced in 1968, was about the death of an Irish town and entitled No One Shouted Stop.

If history is to repeat itself in Naas, it won't be for the want of people shouting “Stop”.