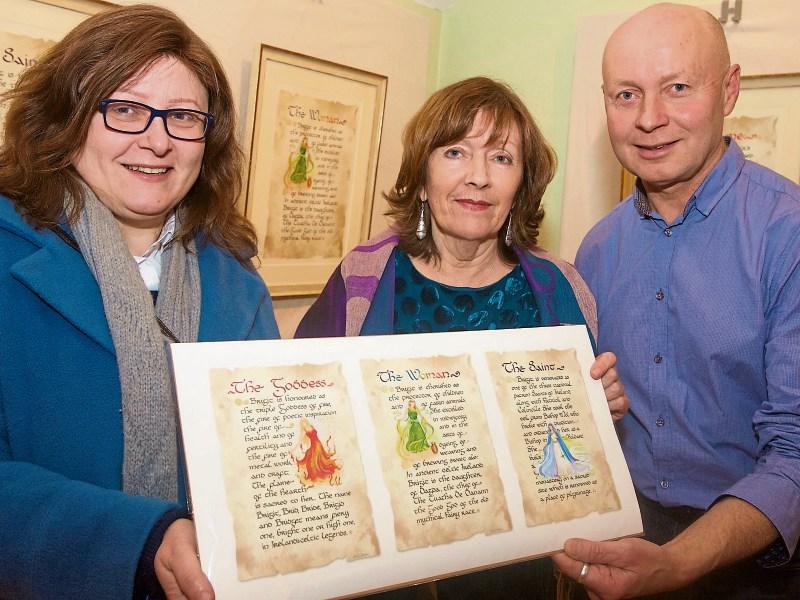 Kildare artist and Calligrapher Josephine Hardiman joins Féile Bríde this week with a series of new works based on the life of St Brigid, the Book of Kildare and Kildare heritage.

She has written a colourful and vibrant series of hand painted works featuring traditional Celtic Calligraphy, stretching from ancient folklore to modern times which will be on display at the Heritage Centre until the end of February.

Her work is based on the orginal Book of Kildare, said to have been found at St Brigid's cathedral, and which historians believe may have been even more impressive than the Book of Kells.

The book was, however, lost but descriptions of it as far back as 1185 still remain .

“I'm working on it since September,” said Josephine. “It was inspired by the Book of Kildare which dates back to the 11th century.

“It is a work in progress at the moment but I started it about four months ago and I hope to keep going with it. Every page is hand painted with calligraphy.”

A Brigid’s Eve ritual at St Brigid's Well will take place today, Tuesday January 31, at 7.30pm, meeting at the Japanese Gardens car park. This is a pilgrimage of quiet reflection, song, and prayer on the eve of spring time.

On Wednesday, February 1, which is St Brigid’s Day there will be a weaving of the crosses at Solas Bhride at 10.30am followed by a celebration concert called ’Let your Light Shine’ with Luka Bloom, at Solas Bhride that evening at 8pm.

The Afri Justice and Peace Conference will take place on Saturday at Solas Bhride from 10.30am to 4.30pm.