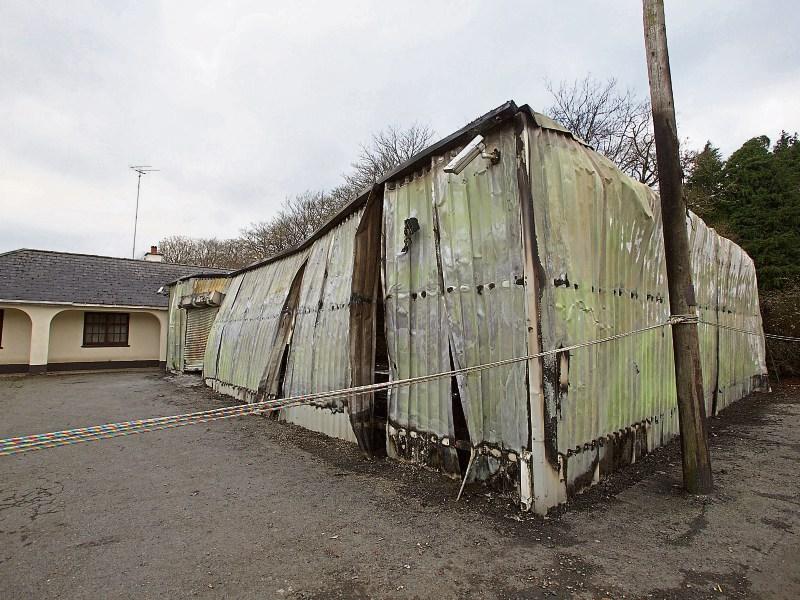 The burnt out shell of the former Prosperous gym.

A Prosperous gym was put out of business when a petrol bomb was thrown into the premises in the early hours of last Wednesday morning.

And the community of Prosperous has responded to the destruction by launched a GoFundMe appeal and planning for a number of other fundraising events.

Gardai are hoping to speak to witnesses who may have seen anything at these key locations in the village.

Gardai are examining CCTV footage which shows three men throwing a petrol bomb into the gym at 3.10am on the morning in question.

CCTV has also revealed that the three men parked at the 1798 memorial near Anne Street, and also has them performing a U-turning in their car near the entrance to the Maynooth Road, at the Londis shop after the gym was set on fire.

Gardai say that the men are not immediately identifiable, but that one of them has a limp.

And they are maintaining an open mind about why they were interested in the premises, believing it was possibly an attempted burglary.

A source told the Leinster Leader: “They were in the village for some time.”

They are also investigating the possibility that these three men have been involved in other break-ins in the general Kildare area.

The house beside the shed was not damaged in the blaze.

And Gardai are looking to speak to anyone who may have witnessed the incident or seen what they believe is that car involved.

Vinnie Murphy, the owner of the gym known as Combat Kickboxing, and the shed, has said he is overwhelmed by the level of support being offered by locals since the fire.

“The very next morning the GAA club (Caragh) rang me and offered me the use of their facilities, said Mr Murphy that he expected to be back up and running this week.

Mr Murphy admitted that he was a little embarrassed. “I’m a private sort of guy,” he admitted.

But he says he has been told in no uncertain terms, that the effort is “for the community of Prosperous”.

Mr Murphy runs up to 20 classes a week, catering for between 25 to 40 people per class.

“The night before it was burnt down, we had 24 women in training.

“There’s a huge amount of community support here. It’s not for you only, they’re telling me. It’s for the community. We had so many people coming in — the footballers, women’s groups, a lot of juniors.

“The adult classes were more like a social classes. People came for the fun, and left with a smile on their faces.”

A local business man in Prosperous backed up the point.

“The community is hugely involved in Combat Kickboxing, and for the sake of the community it's important to get Vinnie back up and running.”

He added that other local businesses in the village were concerned at the ease with which a local enterprise was put out of business.

Mark Carroll, who set up a GoFundMe appeal, explained that “Vinny’s club is gone. He has no facilities — he’s going to rely on the good nature of the club members.

“We’re going to get him back up and running, get some sense of normality, and then look at the bigger picture,” he said.

“The kickboxing community and local community in Prosperous are fantastic. Vinny is an intrical part of Prosperous — he gets involved in lots of things.

As well as the GoFundMe appeal, which at the time of writing up is to €5,405, the local GAA club, Caragh, is planning to give the proceeds of their weekly Bingo to Mr Murphy, and there will be a night in Larry's on February 11.