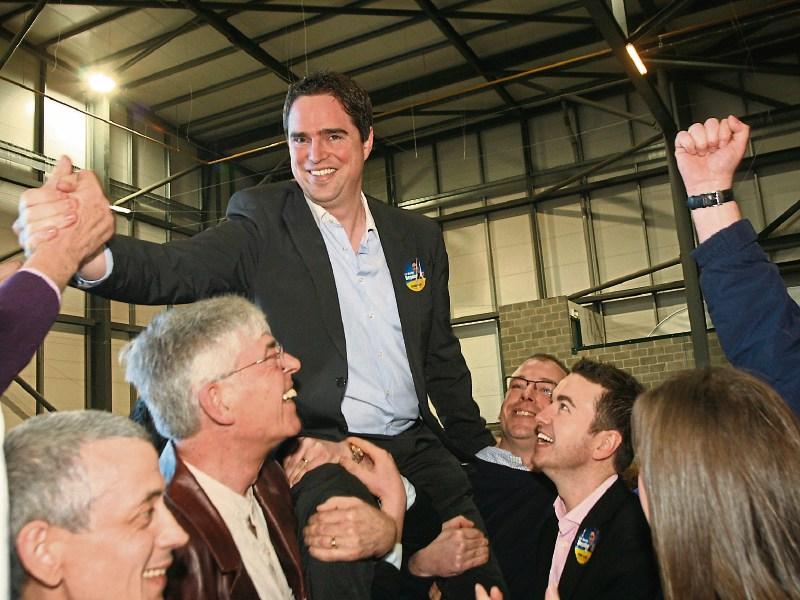 Martin Heydon celebrates his election on the first count in Kildare South back in 2011 with supporters including Alan Dukes. Heydon's will be a slow march to the top

Two years ago in March I made a bold prediction in this column — with ‘bold prediction’ meaning my colleagues thought I was stark crazy.

The exact quote was: “My own theory on Martin Heydon (which not a lot of people agree with) is that he will one one day be Taoiseach. Not any time soon mind you - somewhere around the early 2040s when Messrs Varadkar and Harris et al have punched themselves out, Heydon will will still be moving slowly towards the top of the field, en route to the parade ring.”

Why would I drag this out now? Is the the former Larries delegate to the County Board on the brink of the ultimate elevation?

Well, no, and the only reason I remember this column is that it has become a joke in here. Any time Heydon has a bit of a result somebody will say “you could be right yet” in a tone which is at best indulgent.

And the ribbing has been ratcheted up seeing as the national media is now recognising the hitherto unforeseen potential of the Colbinstown emissary.

In a recent feature in the Irish Independent, flagged by Heydon himself on Facebook, he was highlighted as ‘one to watch’ and the piece concluded, “Kenny or his successor will find it hard to overlook him next time there are ministerial posts up for grabs”.

A reason given was that Heydon is now the chairman of the Fine Gael parliamentary party and therefore closer to the inner circle and playing a role in strategy. This is a valid point.

But it was in the following statements where things went a little awry.

In his new role “he is not afraid to be controversial”. This was breaking news to me. Heydon makes divisive statement as often as Donald Trump makes even-handed ones. What had he said?

“He criticised the party leadership for failing to heed the concerns of TDs in the run up to the election” and “the party should have a succession plan in place for when Enda Kenny steps down”.

Everyone in Fine Gael said the TDs should have been listened to more after they lost lots of seats in the election.

It would have been controversial if in the run up to the election Heydon said, “You guys aren’t listening to us” . . . But of course he didn’t do that.

And it would have actually been more controversial if after the election he’d said the opposite of his “controversial statement” — something like “we were listened to and anybody who lost their seat, well that’s their own fault” . . . But of course he didn’t say that either.

Same goes for stating that they should have a plan for when Enda, finally, decides he has strummed his last air guitar as Taoiseach.

If Heydon said they should not have a plan and instead let the great man do an Alex Ferguson and leave when it suits him, and then elect a new leader — that would have gone against the grain in his party and by consequence have been controversial . . . But of course he didn’t do that.

So just in case Heydon starts to believe this publicity and sees himself as a born-again, lay-it-on-the-line, straight talker we are here to to offer some free advice that he is unlikely to post on Facebook.

Heydon should never attempt controversy. It's not in him. His success locally depends on being not too racy but likeable; a steady guy who will help a constituent with a problem. And in Dublin he’s on the slow track to being labelled a “safe pair of hands”.

. . . No tub-thumping speeches at the Ard Fheis, no rebellions, no withering put-downs across the Dail chamber, no nine o’clock news sound bites that enter the lexicon. None of that. Just a safe pair of hands. It’s the John Major route to the top - one that has been travelled by the current Taoiseach among others.

I remember my dad giving me similar decades ago. "If you keep your nose clean," he said, "don't p*** anybody off and learn how to speak well in public you'll do well."

He should know. He wasn't able to do either and, incidentally, neither can I - but the Martin Heydons of this planet ... yes they can.

And as a consequence, Heydon won’t be far off the party leadership in a little over two decades' times.

Indeed, the last man standing's main obstacle to high office then may well be the proclivity of the Irish electorate to choose Fianna Fail over Fine Gael most of the time. But perhaps by then the Civil War parties will, as the Spice Girls urged, have reached the point in their relationship where two become one.

And who better to steer the ship than a safe pair of hands?