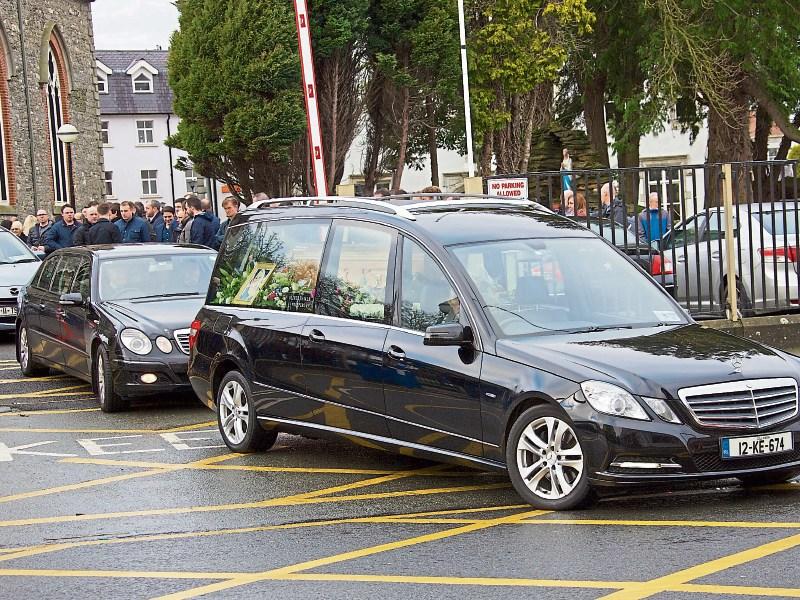 The Church of Our Lady and St. David Naas was thronged today for the funeral mass of Sallins resident Yvonne Slaughter.

A native of Thurles, County Tipperary, Ms Slaughter who lived in Sallins with husband Brendan and their daughter Eabhe and son Gavin, died in a road accident on January 8 while holidaying with friends in Morocco.

The congregation included the Deputy Moroccan Ambassador to Ireland Rachid Seghrouchni as well as classmates of Eabhe, a Leaving Certificate student at Piper’s Hill College, Naas and principal Colm O’Connor, as well as her heartbroken neighbours and friends.

They heard Brendan describe his wife as “a wonderful woman in every way.” There was laughter when he said Yvonne’s late brother Rocky had now found the lead singer for the band he had always been trying to put together.

“Yvonne had a great interest in music and had a voice that could sing a wide range of songs with no difficulty and she had a smile that would light up any room. There’ll be a serious session in Heaven tonight", he added.

“I was captivated by her beauty and her smile which never failed to brighten up my day and she was a rock of sense.”

The couple married on a sunshine-filled day in Thurles Cathedral, living in Dublin initially before moving to Sallins where their children began their education at the local primary school.

“Our lives were complete when our children arrived and she raised them in a house filled with love.”

Yvonne, he said, was caring and compassionate and had a strong sense of fair play; what you saw was what you got with her.

“She had many friends at the gym in Monread and I think the step and spin classes will be quite for a while to come. You were the light of her life; we will always love you.”

“We are living out God’s time  and when we are called to Him it may be sudden or it may be after a lengthy time. Death is not the end but a passing to a new life, said Fr Flattery.

Gavin read a letter from St. Paul which said that death is swallowed up by victory.

Yvonne is predeceased by her mother Phyllis and father in law Frank and is also survived by father Martin, mother in law Mary; brothers Thomas, Michael and John; sisters Breda and Mary.