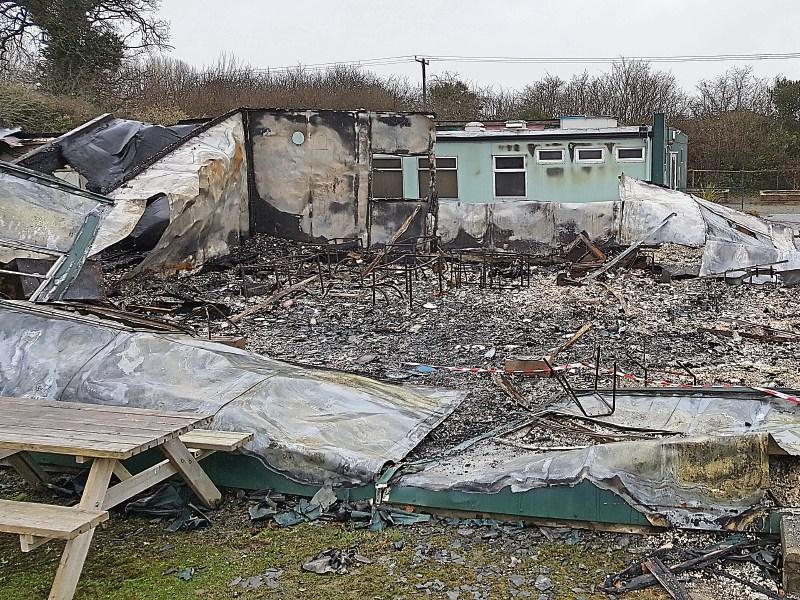 THE local community and many others have come to the rescue of a north Kildare primary school which was demolished by fire at the weekend.

Weston Primary Montessori school, on the grounds of MU Barnhall Rugby Club, which has twenty six pupils, was burned to the ground in the early hours of Sunday morning, last.

Fortunately, no one was injured in the fire.

School spokesperson, Christine Savage, from Celbridge, a member of the school’s board, said that they were overwhelmed with the generosity of everyone, including the rugby club, into whose clubhouse premises, the school moved on Monday morning. “The club were fantastic,” she said, helping with the move.

Ms Savage said there were people in the school building up to 8.00pm on the Saturday night, preparing  for the opening on Monday morning.

She said they do not know what started the fire and are awaiting information back from the Gardai and Fire Services.

She said they were hopeful of one option but they are awaiting confirmation on that.

She said have been bowled over by the response from everyone, from the parents of the children at the school to TD, Frank O’Rourke, to the Parents Association of Primrose Hill Church of Ireland school. Because all the books and materials belonging to the children were destroyed, the Association began to look for books on Sunday, said Ms Savage. “I don’t think we will ever be able to thank them all enough.

Ms Savage also said that a number of school book publishers were on very quickly to donate books.

The school has 12 primary pupils and 14 in the preschool section, working under the guidance of principal, Gail Hartigan.

It has a preschool and school element with pupils coming from Leixlip, Celbridge and Maynooth in north Kildare and Lucan. A new student joined them on Monday and another is due next Monday, said Ms Savage.

The school was formed in July 2016 by the teachers and parents of the former Glebe Primary Montessori School which was established in 1978.