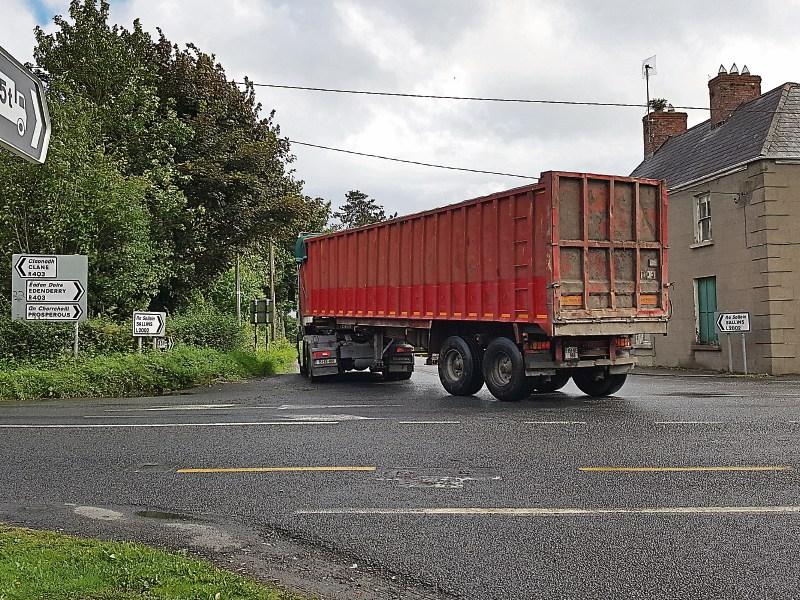 HAULIERS bringing material to Bord na Mona’s controversial Drehid landfill site do not want to use the M4 motorway because the motorway is tolled.

solution for residents in the Millicent and Prosperous area of Kildare, who say local roads and their property is being damaged by large lorries.

The Leader understands that a meeting between Bord na Mona and residents has been scheduled for this Friday.

A spokesperson from the Millicent/Firmount residents, Robert Volkamp, said that they would like to see a road from Drehid to the M4 created and are urging the authorities to insist on heavy traffic using the M4 and avoid regional and local Kildare roads, for the most part.

They have estimated that 65% of Drehid traffic turns left on leaving Drehid and travels along their narrow road. About 35% turns right and head towards the M4.

The resident say they remain unsure of the exact amount of material going into the Drehid landfill site and ask whether infill material is included in the calculation of tonnage going through.

Apart from Bord na Mona, they have concerns over the plans by other companies.

On November 28, following a request by Cllr Tim Durkan, Kildare County Councillors were told that  review of county wide speed limits is to be delayed.

The Council has made a submission to Bord Pleanala, which is said to include a claim for €5.8 million levies  from Bord na Mona to cover damage to roads and bridges.

The appeals board is expected to make a decision or determination on that next April. A review of the haul routes is required to be completed within six months of the permission granted to Bord na Mona to extend the capacity of Drehid.

But there is also a dispute over who will do the route review.

Cllr Durkan asked if the Council would move forward the speed review, particularly in relation to the Drehid haul routes, reducing limits to 60 kph.

Niall Morrissey, Director of Services, Roads, Transport & Public Safety said the Council have tried to move forward with the speed limit review but there “are insufficient resources to complete our work programme including the review in as timely a manner as would be hoped for.”

He also said they were about to lose further engineers including the engineer trained to carry out the review. He said  successor will have to be trained as only those with suitable training can complete the work in accordance with guidelines.

Mr Morrissey said they would not recommend “temporary” speed limits.

Cllr Durkan said there were reports of damage to property and people having difficulty getting access to their own property.

Cllr Martin Miley said the review of speed limits was three years behind schedule. He also said that with the Kill dump, tags ensured that lorries did not get paid if they they did not use the recommended routes.