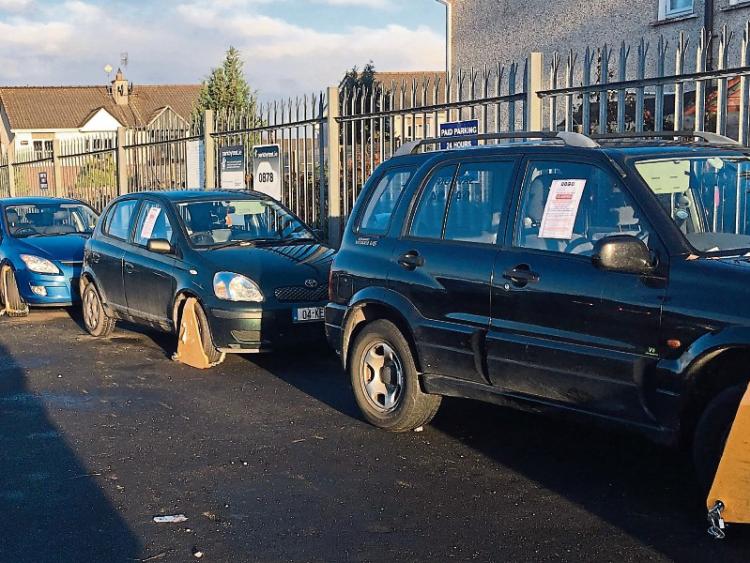 The 12 train passengers, who had their cars clamped at Newbridge Train Station last Wednesday, will have their clamping fines refunded.

Today, Iarnród Eireann told the Leinster Leader it would be paying back the €120 fee per car, for those who paid for their parking ticket, but parked illegally.

“As a gesture of goodwill therefore, we will be arranging a refund of the clamp removal charge on this occasion only to the individuals involved who paid for parking but did not park in marked spaces,” said company spokesperson, Barry Kenny.

“While the area is clearly marked as being one where parking is not permitted and clamping will apply, we will install new signage to highlight the availability of the secondary car park area.”

He said the station has 475 spaces over two car parks and with typical occupancy levels of no more than 50%, there is more than enough capacity for all customers. He said NCPS is instructed by Iarnród Éireann to clamp cars which have not paid for parking, or who do not park in marked spaces.

“That said, we do acknowledge that the notable increase in demand this week following the introduction of the new Phoenix Park Tunnel services may have resulted in customers who were unfamiliar with the car park traveling, and with those used to getting spaces in the area in front of the station arriving shortly before departure,” added Mr Kenny.

“I had been approached by individuals who were shocked to find their cars clamped when they returned to Newbridge on Wednesday afternoon even though they had displayed valid parking tickets. There appears to have been an increase in cars parking at the station due to the new services from Nwebridge to Connolly and Grand Canal,” said Dep Heydon.

Dep O’Loughlin said she understood some cars were also clamped yesterday. She also drew attention to the fact that the toilets at the station are closed. She said she also raised the matter with the Department and was told this was due to fears over anti-social behaviour.

“You have to buy a ticket to go through to the toilets inside the station so I hardly think this would be an issue. They also said there are toilets on the train. However, if you miss your train and have to wait for the next one, there is nowhere to go to the toilet,” she said.

Commuters had been horrified they were clamped when they disembarked from the train.

One couple from Blacktrench were horrified on their return on Wednesday to find their car clamped after they paid €4.50 for a full day’s parking.

Speaking in the immediate aftermath, the lady said; “My husband had parked the car in an area alongside other cars parked in marked car spaces. But there were no yellow lines or signs to say it wasn’t allowed. We weren’t blocking  the exit or approach or any other cars.”

“This is disgraceful; there was a young man beside us, with three small children who looked almost ill when he returned to find his car clamped. He had to leave it there overnight as he couldn’t pay the fine yesterday. With only a few weeks to Christmas, this is disgraceful and just so upsetting”.