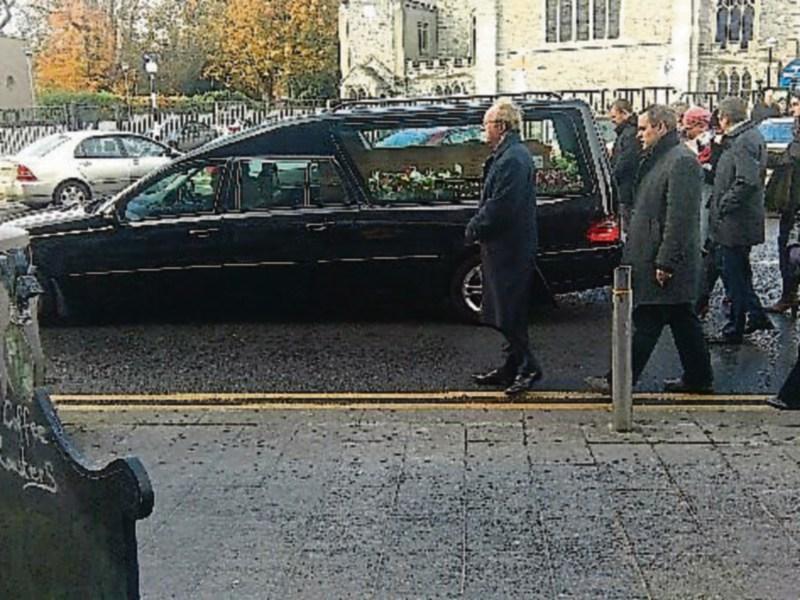 The cortege leaves the church today

The Church of Our Lady and St David, Sallins Road, Naas was today filled to overflowing for the funeral mass of local woman Sheena Walsh.

Students from St. Mary’s College braved the cold November air to form a guard of honour as the hearse bearing her remains from  home passed by the school en route to the church, where many more friends of the 31 year old were waiting.

The outpouring of grief and sympathy which followed her death brought so many to the church that parish priest Fr Liam Morgan advised the congregation at the requiem mass that seating was available in the church gallery.

Sheena’s mother Mary said the spirit of love which her daughter engendered was evident in the numbers who visited the family house at Kingsfurze and who turned up at the church today.

Her sister Tara said Sheena had told her that if she knew of love it was because of Tara; but she added “in fact Sheena taught us a deeper love.”

Gifts were brought to the altar during the ceremony, concelebrated by Fr Ruairi O Domhnaill CC Carlow and Deacon Fergal O’Neill, reflected her many interests.

They included a hurley and sliotar, a Special Olympic jersey, a book in which Sheena recorded the events of her life,  and a pricing gun. Sheena was a supporter of GAA and horseracing and participated in basketball, bowling and swimming.

Sheena was due to travel to Brussels next week as a representative of Down Syndrome Ireland’s National Advisory Council.

“If we were shocked by this unexpected and sudden death, we can’t begin to imagine the shock felt by her family. One person, one life evoked much love and warmth,” said Fr Morgan.

“She was the most outgoing person who met all of life’s challenges with gusto. She had a gentleness and also a willingness to achieve the impossible,” said her brother Ronan.

It was almost noon, two hours after the ceremony started, by the time the cortege left the churchyard for her final journey to St. Corban’s Cemetery, passing the entrance to her home as it moved along Dublin Road.