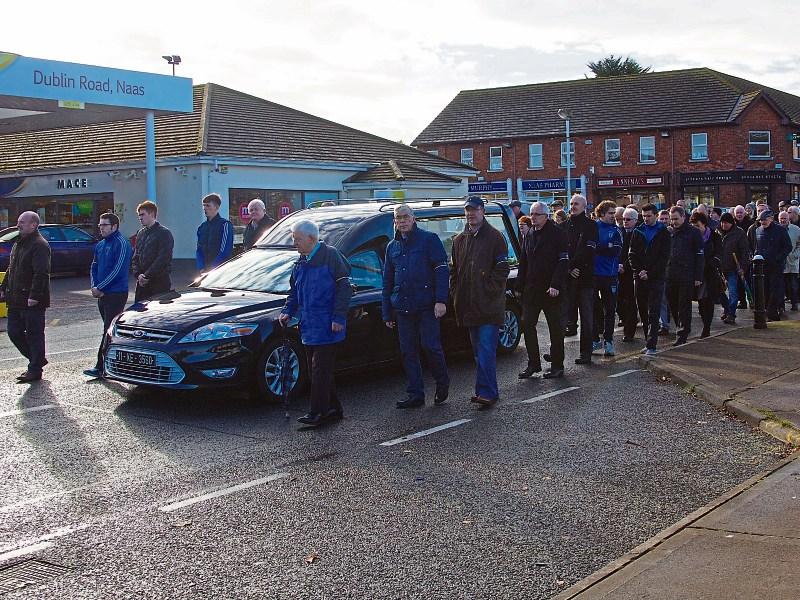 He was described by Naas parish priest Fr Liam Morgan as “one of the local characters of Naas who grew up in tough days, harsh days.”

He told mourners at the Church of Our Lady and St. David on Sallins Road that as a young man Paddy worked as a herder of cattle at a time when the area was less populated and “you could drive cattle on the roads from one fair to another.”

There was laughter when Fr Morgan recalled the story of a return visit by Naas natives to the town. The pair had been absent for some years and  Naas had changed so much that, as they drove through, one wondered aloud if they were in the right town.

“Of course we are,” replied the other “there’s Hackett.”

The congregation, which included many members of Naas GAA club, heard that Paddy’s love of the GAA was a constant for him and in many ways the club was his family.

“Club members as well as others kept an eye on him,” said Fr Morgan.

Morgan Lalor, a former vice principal at the St Corban’s boys primary school and who guided Naas to senior hurling championship success, described him as “the last great character in Naas, who never complained about what life threw at him.”

Mr Hackett’s funeral took place to St Corban’s Cemetery. He is survived by his niece Imelda,  and her children Alan and Deborah, who read a poem during the requiem mass.