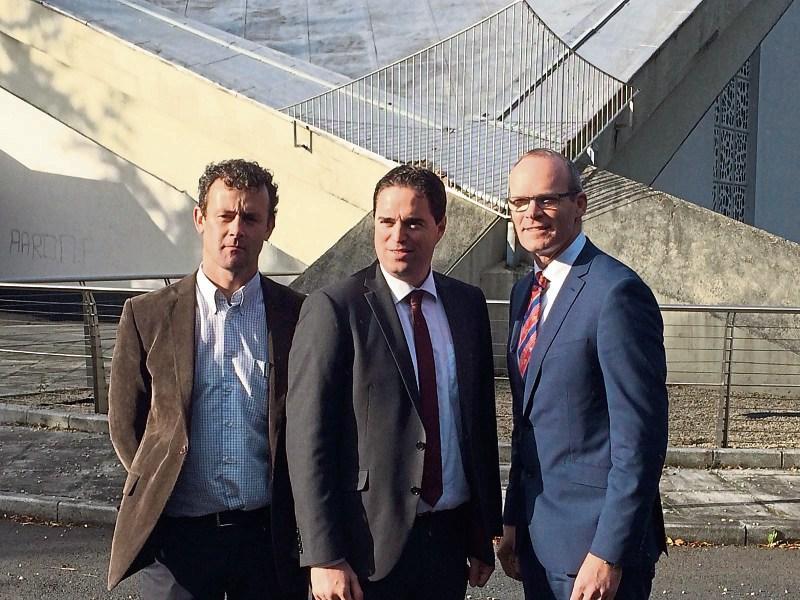 Housing Minister Simon Coveney visited Athy last week to get an update on progress of the redevelopment of the site of the former Dominican Priory.

Minister Coveney was given a tour of the site last week by senior officials from Kildare County Council, where he was briefed on the progress to date. He was also accompanied by Kildare South TD Martin Heydon.

The site was acquired by Kildare County Council and the Department of Environment in 2015 for €1.39m.

Plans are at an advanced stage to convert the former priory into eight family housing units which will be managed by the Peter McVerry Trust to directly alleviate homelessness.

“Representatives from Peter McVerry Trust was also on site to meet the Minister and discuss ongoing plans to have the units ready by the end of the year,” said Deputy Heydon

“The plans for this site are exciting for the town of Athy. There is also potential to develop an ‘interpretative centre’ for the planned Barrow Blue Way and consider how the many water sports activities and clubs in Athy can also be catered for on the site.”

It is envisaged that up to €8m will be invested in developing the site over the next decade with plans to convert the church into a library and build additional housing on the site.

Minister Coveney also visited the former church and received an update from County Librarian Marian Higgins on plans to convert the building into a new library for the town.

However, a community group called ‘Staff Our Libraries’ has raised concerns over the proposed plans for the new library in Athy, which will be an open library.

The group contacted local councillors in Athy last week to list their concerns after councillors unanimously agreed to commence proceedings for a new €2 million “open library” at the former Dominican Church site.

The funding for the proposal will come from the Library Service with conditions attached including that the library will be operated on an open, self-service 8am to 10pm basis.

The ethos of an open library means that it will not be staffed during out of business hours — however members will still have full access even on national holidays.

In this instance staff levels will also increase from four to nine, however there are concerns that levels may be cut in the future as part of the open library system.

The group ‘Staff Our Libraries’, which is made up of library employees as well as local community members, claims however that communities have not been consulted and there is no information on how much an open library system will cost to run.

They also state that once staffless hours are approved for a Public Library the “very ethos and integrity of that service is compromised and it is no longer open to everyone.

“This is a huge change to take place and we believe will lead to the downgrading and devaluing of the service over time,” they state.

“The report on the pilot scheme raises a lot of questions and has not been independently evaluated, such as will members using the library out of hours be safe as the CCTV is not live monitored, and how can Councillors make an informed decision without knowing the ongoing costs?”.

Kildare County Council has failed to comment on the concerns to the Leinster Leader, however local councillors were informed at a recent Municipal District meeting that the new library could be open by September 2017.