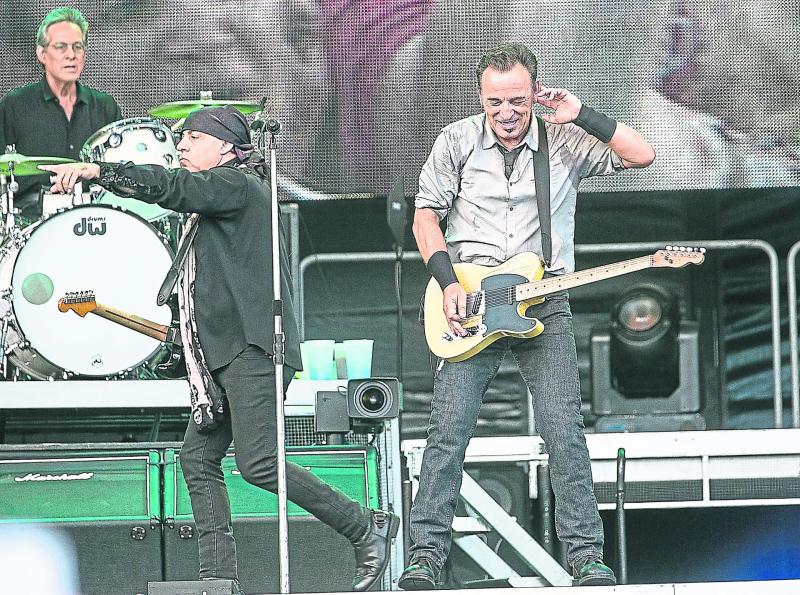 With the recent release of Bruce Springsteen’s autobiography “Born to Run”, it’s no surprise he makes several mentions of his Irish heritage.

In October 2015, a top US genealogist revealed the Boss’s great-great-granny Ann Garrity hailed from Mount Prospect, a townland on the outskirts of Rathangan.

When Bruce Springsteen played Croke Park last May, an invite was issued to the Boss to visit the town to retrace the footsteps of his Kildare relatives.

Chairman of the Rathangan Community Association, Paddy O’Loughlin said the legendary rocker would be welcomed with open arms should he decide to make his way to the west Kildare town. The Kildare Newbridge Municipal District also issued an invitation on behalf of Kildare County Council on foot of a request from Cllr Mark Stafford. Deputy Fiona O’Loughlin also backed the move.

“Given the recent revelations that his ancestors came from Rathangan, it would be great if he could come over and visit and have a look around. I’m sure we could give him a tour,” said Paddy O’Loughlin at the time.

Speaking afterwards, Mr O’Loughlin said; “It was a pity he didn’t make it, but our invite still stands and we would welcome him with open arms anytime he likes.”

The genealogist who uncovered Barack Obama’s Moneygall roots, Megan Smolenyak, revealed Ms Garrity was 14 years of age when she left Ireland with her two sisters in 1852 for Freehold, New Jersey.

Any Garritys or Kellys with relations living in the Mount Prospect area back then could be related to the singer. Garrity is not a common name in Rathangan, but there are large number of Kelly families.

Prior to the May concert, the eight Kildare Newbridge Municipal District councillors backed Cllr Mark Stafford’s (FG) proposal to send the global rock star an invite. He stressed a civic reception in the council offices wasn’t the way to go. He said Rathangan had a large number of famous off spring including Jedward, Brian Dowling, and Maura Laverty. Cllr Fiona O’Loughlin, who was on the council at the time, added William A Byrne to the list.

He described how Ann Garrity, brought a beach tree seed from Mount Prospect to plant on American soil. He supported the Rathangan Community Association’s wishes that Bruce Springsteen might be asked to plant a tree in Rathangan.

“There are no Garrity’s in Rathangan anymore but there are certainly lots of Kellys and with Mario Corrigan’s help, I have no doubt we would be able to narrow it down and find his relations,” he said at the time.

The invitations still stand and there is no doubt The Boss would receive a warm welcome if he decided to visit his ancestor’s hometown.