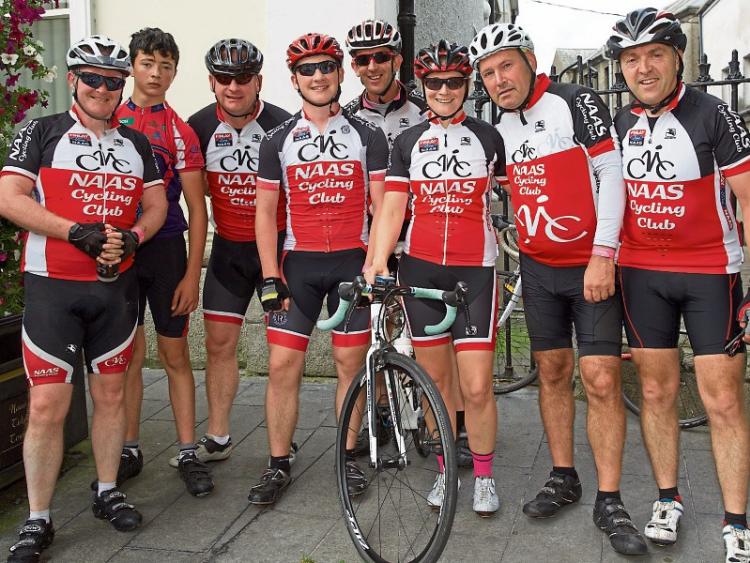 The Annual Marie Keating Foundation Tour of Kildare cycling event took place on Sunday, August 7, and was once again a very popular event, attracting a large number of participants.

Cyclists came from clubs all across Kildare, and even further afield to take part in an event which sorely tests the erroneous hypothesis that the Lilywhite county is a flat one.

Starting at 10am the Tour made its way from Naas to Johnstown, Kill, Straffan and eventually to Kilcock where it headed back towards Clane.

After a quick water and food stop the cyclists headed west towards Prosperous before the climbing began, first into Kilmeague, then over the Hill of Allen, followed by Boston and Dunmurray Hills before the piece de resistance, 'The Wall', before descending into Kildare Town.

From there it was out onto the Curragh as far as Athgarvan and back into Great Connell before taking the main road into Naas for the traditional barbecued burger.

There were also 20kms (family) and 65kms routes for those who weren’t feeling up to the 110km event.

The cycle is always attended by Martin Earley, a professional cyclist from the days of Stephen Roche and Sean Kelly and who won stages in the Tour de France, the Giro d’Italia as well as being Irish Champion in 1994.

The event raises vital funds for the Marie Keating Foundation which provides information on all the main cancers.

Speaking to the Leinster Leader Linda Keating said that 650 cyclists took part in this, the 15th edition of the event.

“It was absolutely fantastic. It was our best ever year.

“Everything went so well, there were no major incidences.

“All we got was compliments. We owe so much to the 60 marshals and our sponsors, like the Naas Court Hotel, Avonmore, Swans and Montagues who help us with the barbecue.”

First home was Nathan Mullan who had spent the past month in Belgium racing.

From Down originally, his sister Jennifer is a member of the Naas Cycling club.

He enjoyed the day, telling the Leader that it was “very well organised”.