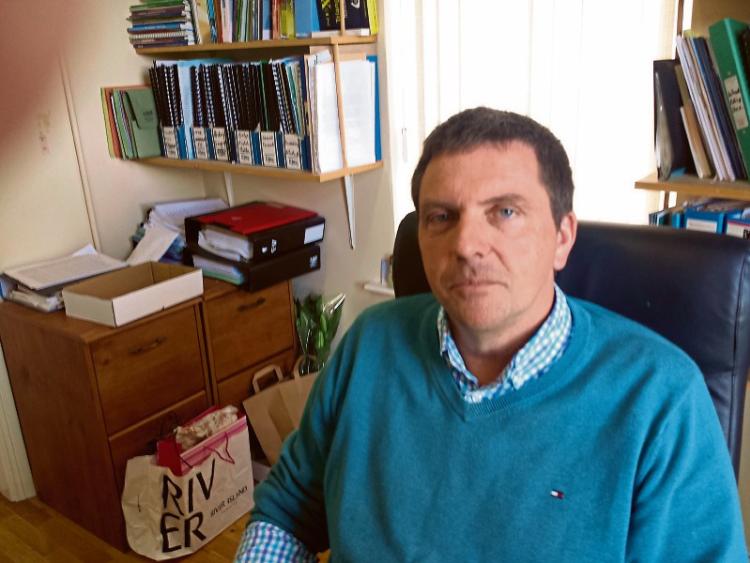 It has been quite a long one.

The 55-year-old is stepping down as principal after spending 35 years at the school.

Formally, he will retire on August 31.

A native of Skehana in Co Galway, 10 miles from Athenry, he grew up on a small farm and after school in Mount Bellew trained as a teacher in Carysfort College (1978-81).

He had considered a career in commerce but he was drawn to teaching.

He met his now wife Deirdre in college when they were 17.

By a happy coincidence she is currently principal of the other Clane primary school, Scoil Bhride, which looks after the girls.

When Pat Costello arrived in Clane, the boys school was located on the Dublin Road and staff used a caravan in the middle of the road.

On June 30 1982, they moved to what he still calls “the new school” on the Prosperous Road.

He is the last staff member who worked in the old school.

It now has 24 teachers, four special needs assistants, two secretaries and a caretaker. The school is on the verge of a getting a new building.

Pat became principal some 16 years ago.

He is going now because, he says, the school inspectors are younger than him and some of the lads he taught on arrival are now dads. “I definitely want to go before I see a granddad,” he says.

Teaching has been in the blood as there are a lot of them in his family.

When he was in sixth class in primary school himself — in a school which had two teachers — he was sometimes dispatched by the headmaster to look after the fourth class if the lady teacher was absent.

After college he got the job in Clane, commuting from Tallaght and Rathfarnham for a while.

A big difference over the years has been the large drop in the number of farming families in the school. Most now live in the urban area.

He has been very involved in sports. “It is important to instill a love of sport and keep them busy.”

The school has a great relationship with the GAA club across the road.

Then there are the staff. “I’ve been lucky to have had great staff,” he says.

His one regret is that he will not be in place to see in the planned new school. “I wrote my first letter (about a new school) to the Department in 2001, after becoming principal in 2000,” he said.

There has been a delay in its development since 2007 due to finances.

Pat expects planning permission to come through at the end of this month, at which point building should be able to start immediately.

He will take six-to-eight months of a break, during which he will improve his golf and look at a motorbike trip or two.

“I have had great fun. I worked hard and played hard.

“I hope that is how people will remember me.”