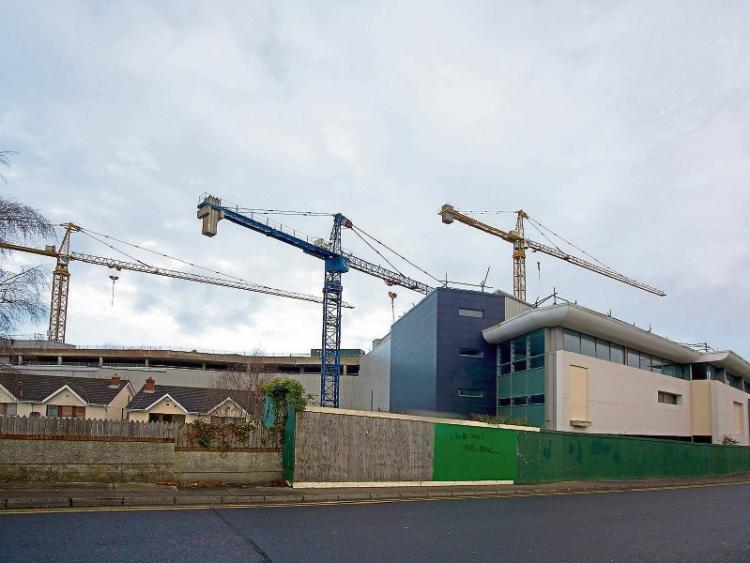 Kildare County Council is owed well in the region of €2.8m as a result of the impasse surrounding the Naas Shopping Centre (NSC).

Naas councillors were briefed at a behind closed doors meeting by a senior KCC official recently.

KCC has declined to comment on the contents of a verbal report given at that meeting.

The Leader understands that KCC is owed up to €2.8 million, a figure which includes the cost of selling the then Naas Town Council-run car park, which became the site for the NSC, which was developed by Marshalsea.

The centre was due to open in December 2009.

The figure also includes sums which have been spent on expert consultants, including legal fees up to now.

The Leader also understands that up to half of this figure is guaranteed by the National Asset Management Agency (Nama), which is effectively overseeing the future of the NSC.

Meetings have taken place between KCC and Nama to discuss ways of facilitating the opening of the development, and at least one American finance house has expressed an interest in buying the multi million euro development.

The meeting between Naas politicians was prompted by a call by Cllr Seamie Moore for KCC to ensure that “overdue payments” such as the site sale, levies, legal costs and land acquisition costs are paid to it.

“Under no circumstances should they be reduced or cancelled to facilitate a reduced price sale to a buyer (who would sell the centre on rather than opening it),” said Cllr Moore.

He said KCC has a responsibility to ensure it is paid for the car park site as well as levies and all of the costs.

He also said that if KCC is not fully reimbursed, it should attempt to appoint a receiver to the development company.

Cllr Rob Power said that just because KCC is owed money does not mean it will not be paid.

“I would be surprised if the council did not feel at least some of any money paid will be recouped.”

He said KCC is reluctant to comment because of the outstanding arbitration case with the owner of a piece of land at Corban’s Lane.

Cllr Power also said KCC is working hard to bring all of the parties together to achieve the best possible outcome for Naas.

In a statement to the Leader they said: “Due to commercial sensitivities, data protection issues and the ongoing Arbitration Hearing relating to the Compulsory Purchase Order process connected with the proposed shopping centre at Corban's Lane/Friary Street, Naas, Kildare County Council are not prepared to release any specific financial information relating to the site in question.

“Kildare County Council officials are fully engaged and committed in attempting to secure appropriate development on this site that will ultimately be of substantial economic benefit to Naas.

“In order to secure progress the council are working with all the stakeholders involved and can confirm that the ongoing Arbitration Hearing will not delay efforts to progress the development of the site.”

A representative of Marshalsea said he had no comment to make.