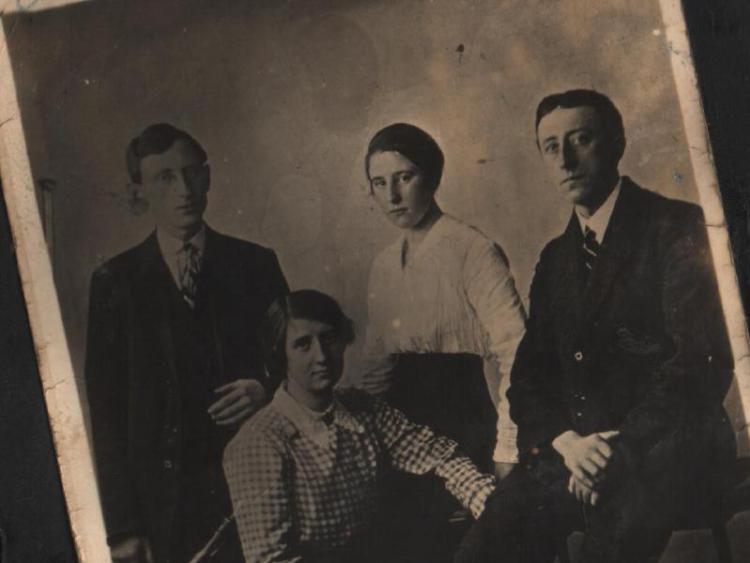 A photo of the Pattersons from 1916, which Daisy (centre) captioned “on the run 1916” which includes her brother John, Daisy, Tommy (at the back) and her sister Kitty (seated)

On Easter Sunday March 27, John and Jim Collins proudly stood in front of the GPO to honour the role their mother, a young Naas revolutionary, played in the 1916 Rising. Jim recounts the story of this brave young woman.

During her twenty six year marriage in Kilcullen, she never spoke of her involvement in the struggle for Irish freedom.

She didn’t mention she reported for duty on Sunday April 23 and remained active until April 30 1916.

A memorial card for Col. Comdt. Tom Keogh, which she kept in her prayer book, is a mystery. Did she know him? How? Why?

Research in the Military Archives in preparation for the centenary celebrations for Easter Week uncovered a substantial amount of information on this mysterious lady's military exploits.

She was born Mary Ellen Patterson of Number 11, Main Street, Naas on December 6 1896.

Her pet name in the family was “Daisy.” On August 1 1914, aged seventeen, she started her apprenticeship at Moran’s Drapery on Talbot Street, Dublin, where she lived over the shop. Having lost her job because of her involvement in the Rising, she was later reinstated and finished her service in December 1920.

“She was courteous, efficient, trustworthy, and an excellent saleswoman.”

Cumann na mBan was founded in Brunswick Street in April 1914 – shortly before Daisy had moved to Dublin. Daisy, like many nationalistic young women at the time, joined the organisation. A member of Michael Collins’ inner secret council, and a member of the IRB, Mr James McNamara, who fought in Easter Week and was later New York President of the Old IRA, proposed Daisy for membership in 1915.

She was enrolled into the Central Branch, Cumann na mBan Parnell Square. Her commanding officer was Miss Lesley Price. Incidentally, Miss Price, who married Colonel Tom Barry, was an aunt of Father Cathal Price, curate in Kilcullen in the 1970s.

The Patterson family of Naas was a Republican family, always interested in national affairs. Daisy’s older sister was President of the County Executive of Cumann na mBan in Kildare. Her brother, Tommy, was very involved in the Easter Rising activities in the Naas/Kill area.

A frequent caller to the Patterson home in Naas was Liam Mellows. Patterson family folklore maintains that when the Black and Tans burned Bushells home in Main Street, which is now part of the Leinster Leader offices, the intended target was the Patterson home. The family had moved out of their house that night as they received word they were to be attacked. In a statement in the Military Archives, Tommy states:

“During the Black and Tan terror, it was no unusual thing to see a lorry of Tans or Auxies pull up at the shop door, call for all the drinks they wanted and leave without payment, frequently bringing some with them. I can state with justifiable pride that all my family have been for long years workers in the National Movement.”

He also states that his grandmother, Anne Tyrrell of The Fisheries, sheltered John Devoy when he was on the run from Crown Forces.

An application for a Military Service Medal for Mary Ellen Collins (nee Patterson) details the role Daisy played. Among her many activities, it noted she paraded in full uniform from City Hall to Glasnevin Cemetery at O’Donovan-Rossa’s funeral in June 1915; carried mobilisation messages to Naas Town and District prior to 1916 Rising; and carried firearms and ammunition for volunteers who were to take part in armed duty at Bodenstown.

It said; “During Easter Week in Dublin she carried ammunition and delivered communications for volunteers engaged in the Easter Rising. She helped the volunteers with food and clothing when they were “on the run” after the 1916 Rebellion. Rendered full service such as dispatch riding and all duties in connection with Sinn Fein general election 1918 to 1921.”

“She stored arms and documents for Martin Savage as well as carried out intelligence work for him. Supplied meals to republican prisoners in Naas RIC Military Barracks. Concealed documents and literature of Republican Army and transferred them to places of safety,” said the application.

Daisy also acted as a scout for IRA on Tan Patrols at RIC Barracks. After the truce, she carried out training at brigade training camp.

Daisy’s statement says she: “resigned from Cumann na mBan on June 29 1922 and took no part in the Civil War.”

In 1933 Daisy married James Collins, The Corn Mills, Kilcullen. He was three years her junior and too young to have been involved in 1916. He was active in later conflicts and spoke many times of his activities. Daisy and James had two sons, John and Jim. Having turned her back on the political scene after marriage, she busied herself with family, her fowl, ducks and geese on the river, the Church, and some acting in the newly opened Town Hall in Kilcullen. She died on February 18, 1959. Her funeral with full military honours took place in New Abbey Cemetery, Kilcullen.

As for the mystery surrounding the memorial card for Colonel Commandant Tom Keogh, which Daisy carried in her prayer book, the military archives records have failed to reveal any answers.