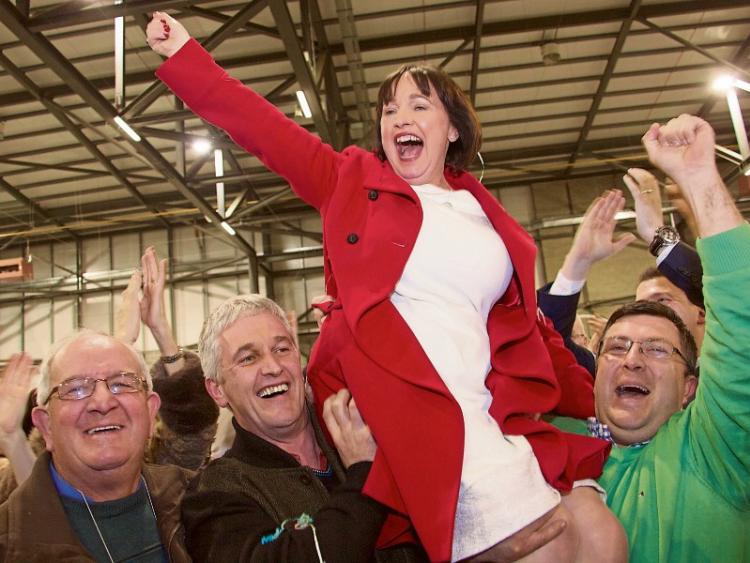 Fiona O'Loughlin (FF) and her supporters were jubilant as she was elected the first female TD for Kildare South. Photo: Tony Keane

For most of the first decade of the millennium, ever since Alan Dukes losts his seat in 2002, the Kildare South constituency had two Fianna Fail TDsh.

The rout in 2011 saw the end of the road for the Sean Power, and with it 42 years of representation by his family.

On that occasion, Power was replaced by Martin Heydon of Fine Gael, with Fianna Fail’s Sean O Fearghail and Labour’s Jack Wall holding their seats.

Five years later, it’s almost back to where we were, with Fiona O’Loughlin regaining a second seat for Fianna Fail.

Where it’s most different is that Jack Wall has retired and his son Mark suffered from the general downturn in the Labour Party’s fortunes.

Against expectations, Fianna Fail stormed back to take two seats. From the first tallies several things were clear – Martin Heydon would top the poll and Fiona O’Loughlin was going to be the stand out performer of the 2016 election.

According to the tally, she got 49% of the vote in her home town of Rathangan.

And Deputy O Fearghail has been a councillor and TD since 1985.

Between them all, they managed to get 57.7%, in a nice sweet spot between half and two thirds of all votes counted.

That put both of them on 11.6%, and clearly not in the running from the word go.

For Cllr Wall it was a better performance than Labour’s national standing, but for Ms Ryan it was a great showing, considering that she did not have the profile of being a county councillor.

An important consideration for both Mark Wall and Sean O Fearghail is the boundary change which saw Monasterevin and a large area in the south west of the county moving into the Laois constituency.

The chanage meant that Cllr Wall no longer lived in the constituency he was running in, and estimates of up to 1,000 votes were lost to him.

But probably the single biggest fact that cost him votes was Patricia Ryan, running for a growing Sinn Fein party that has sought to replace the Labour party.

The first eliminated candidates were Renua’s Mary Kennedy and the Green Party’s Susan McEneaney who got 787 and 836 votes respectively.

All of the remaining candidates got more over 100 votes from them, but Mark Wall got the most, 227.

Next to be eliminated was Independent Declan Crowe who got 2,143 first preference votes. Patricia Ryan (SF) gained the most, getting 835 – more than twice as many as anybody else.

She received 3,250 first preference votes and when she was eliminated 2,024 of her votes went to her running mate Martin Heydon.

A total of 532 of her transfers went to Fiona O’Loughlin, solidifying the latter’s position in second position.

Patricia Ryan was the last candidate to be eliminated – and the lions share of the available transfers, 652, went to Mark Wall, but it still left him approximately 1,500 votes shy of Sean O Fearghail, the next placed candidate.