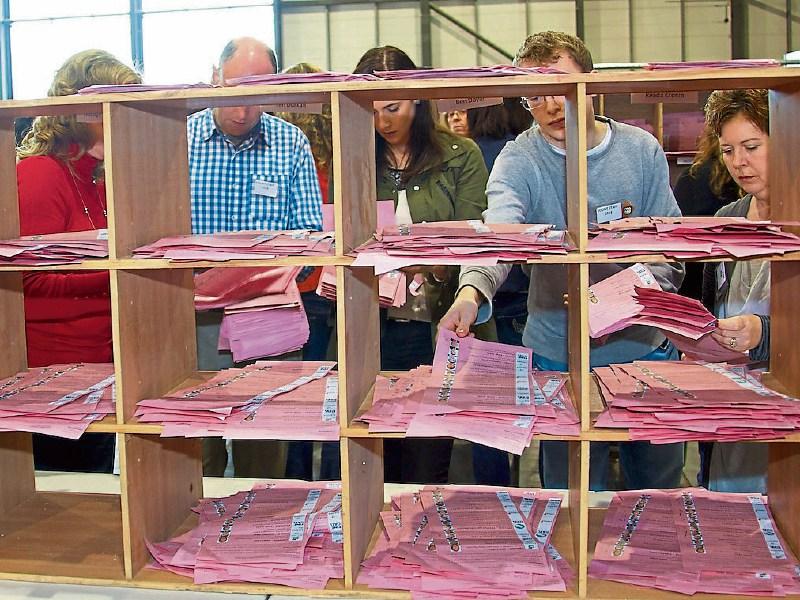 Infighting and intraparty spats havel certainly livened up the election in Kildare South.

South Kildare, with a population of almost 88,000 and an electorate of about 60,000, is both more rural and poorer than its neighbour to the north.

But that’s not to say the constituency does not share the commuter-belt concerns of Kildare North – M7 motorway towns Newbridge, Kildare town and Monasterevin have their share of Dublin dormitory workers, with the attendant concerns over transport, housing and the pressure on social housing.

Kilcullen, Athy and, to a lesser extent, Rathangan, also share those issues, thanks to a population influx during the boom, attracted down by the promise of ‘easy commuting’ to the capital.

Employment and agricultural issues are of concern the further south you get. Athy and Leixlip may share the Lilywhite designation, but they are worlds apart in terms of prosperity and the urban/rural divide.

Kildare South lost over 7,000 voters between Monasterevin and Churchtown to the new Laois constituency during the 2013 boundary shake-up.

That won’t have done any favours for either Labour or Fianna Fail.

On the other side of the coin, the good voters of Monasterevin, Kilberry and the likes have seen a plethora of strange new faces such as Stanley and O’Connell hanging from their lamp-posts in recent weeks.

There is a strong anti-austerity bent in the south of the county, with protesters on water charges, property tax etc seeming to have made more of an impact here.

Local issues such as education are also making an impact, with a squeeze on school places, particularly at second level.

A bustling Newbridge has well overtaken the virtually abandoned Naas town centre as the county’s commercial heartland, but there is still a significant lack of either native or foreign direct investment in the south of the county that would create jobs for locals.

The state of play

Electorally, the constituency tends towards the conservative. Fine Gael, Fianna Fail and Labour hold the bulk of local government seats in its municipal districts, with a smattering of Independents and Sinn Fein representatives.

Fianna Fail lost one of its two seats in Kildare South in 2011, when young Crookstown farmer Martin Heydon topped the poll for Fine Gael with a third of first preferences votes. Fine Gael’s mistake was not running a second candidate in the constituency and wiping out Fianna Fail totally. 2007 poll-topper Sean Ó Fearghaíl’s vote collapsed and he scraped in by the seat of his pants, pushed, surprisingly, all the way by popular Newbridge Independent candidate Paddy Kennedy. Long-standing FF TD Sean Power, now a county councillor, bowed out of national politics with less than 10 percent of the vote – his transfers were all that ensured Fianna Fail retained the one seat.

In terms of the 2016 election, Heydon, at least, is home and hosed. It’s hard to see the personable, popular young politician being unseated. While not setting the political world alight, unlike some of his other debutant government colleagues, he has also rarely put a foot wrong. He’s worked hard for the south of the county, claiming credit for the delivery of schools and road funding projects, and is likely to be rewarded at the ballot box. He also has strong GAA ties with St Laurence’s, which won’t hurt either.

Last week, he became a national viral media star with his appearance, alongside Fine Gael Councillor Darren Scully, in a Back To The Future video spoof, imagining what the future of South Kildare would be like were he not returned to the Dail. And while it’s unlikely that if the politics doesn’t work out that he’ll be treading the boards for a living, it showed that he can take the mick out of himself when the occasion requires – a trait likely to appeal to young floating voters.

Whether or not there’s a seat to play for in South Kildare depends on if Labour’s Mark Wall can keep going the ‘Wall Machine’, the party apparatus his retiring father Jack has established in Athy.

The much-liked Jack has held the Labour seat in Kildare South since 1997. Mark himself is a long-standing councillor for Athy.

The Walls are firm believers that all politics is local, and the party office is very efficient at sorting out local issues for constituents.

But, although name recognition will obviously be a boon for Mark, against him is the national disillusionment with Labour and the question of whether his own popularity in Athy will translate to towns such as Newbridge and Kildare, where he is not as well known. The Wall ‘homeland’ of Castlemitchell is also among the townlands lost to Laois in the boundary redrawing.

Confusing name similarity aside, both are Newbridge-based; both were brought on board with an eye to fulfilling the gender quota and, though they have different political priorities and approaches, both are likely to appeal to female and urban voters looking for a change whilst remaining with the ‘safety’ of their chosen party.

Fine Gael grassroots in Kildare were unhappy with the addition of the outspoken, business-focused, debut councillor McLoughlin Healy to the ticket, although the party at a national level were forced to openly declare their support for her after this paper pointed out last year that they’d effectively ignored her since she was added to the ticket.

The Fianna Fail convention decided to run just one candidate, Ó Fearghaíl, and the widespread addition of long-serving councillor O’Loughlin to the ticket was delayed without explanation, provoking speculation of unhappiness within the grassroots.

Neither Fianna Fail nor Fine Gael seems to have established a competent vote management strategy in South Kildare, with Newbridge, in particular, seeming like a free-for-all battleground.

That’s a pity for them, because the pair of candidates that worked together more efficiently might have a better shot at returning a second seat for theirparty.

Of the other candidates, Sinn Fein’s Patricia Ryan – a surprise pick after local party members declined to put forward party-favoured Naas councillor Sorcha O’Neill – has come out of the woodwork in recent weeks, but is unlikely to register.

Declan Crowe, a serial campaigner on social issues, will make some noise for the Independents, but is unlikely to make much serious impact.

The tragic death of Newbridge councillor Willie Crowley before Christmas – an Independent who had declared his intention to run for the Dail – must also be mentioned, as he would have attracted independent and protest votes from across the county.