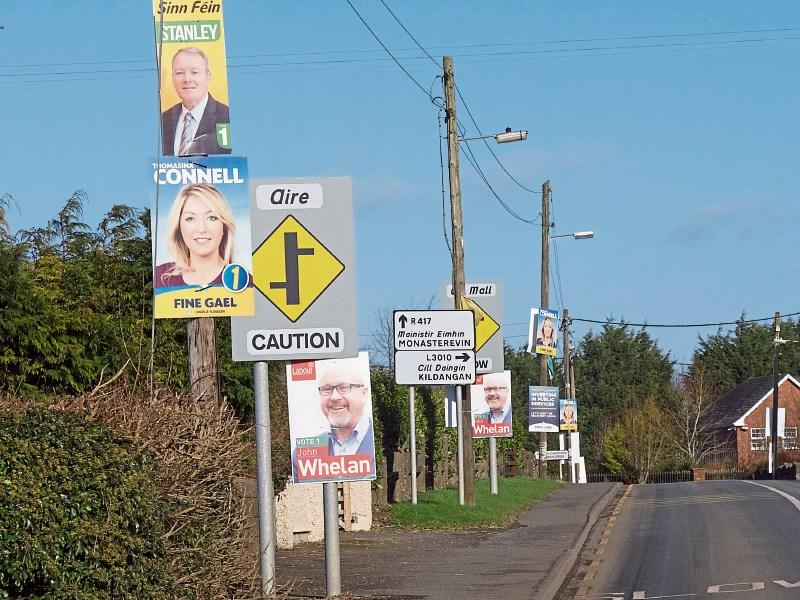 Posters of Laois politicians vying for votes in Kildangan, Co Kildare, which is now in the Laois constituency

When arriving in Kildangan, the political poster pin ups reveal a bevy of Laois
politicians.

Don’t worry, you are still in Kildare, the geographical boundary hasn’t changed, just the electoral area. In fact, two of the three sitting Kildare South TDs now live in the Laois constituency.

Seamus Kearns, Chairman of the Kildangan Community Development Association said the reaction has been mixed.

“Some of the people from around the area may not know all of the candidates. We have been dealing with Brian Stanley (SF) who came to our meetings even before the election. We would have known him. Sean Ó Fearghaíl (FF) would have been very strong in our area. Now, not even the members of his family can vote for him. Mark Wall (Lab) would have helped us out in the development association and they have both lost votes here, ” he said.

Seamus pointed out that Kildangan is not far from the Laois border anyway and canvassers have been out around the village. One of the main issues concerning local residents is the bridge.

“You have children crossing it, mothers with buggys. It’s a busy road, you have heavy farm machinery in the summer, lots of articulated trucks and the traffic has increased. We have been looking for a contraflow system and for a footpath to be put in,” he added.

Six electoral divisions, with a population of 7,186, have moved from the Kildare South constituency to the new Laois constituency. They are Monasterevin,
Kildangan, Ballybrackan, Harristown, Kilberry and Churchtown.

Up north, a swathe of land from the North constituency has been transferred to the south. A quick glance at the area reveals that outside the villages of Robertstown, Coill Dubh and Derrinturn, this is a very rural area.

Of the three urban areas, both Robertstown and Coill Dubh have populations of approximately 700 while Derrinturn has, according to the 2011 census, just over 1,500.

According to the commission, which decided on the transfer, there are four electoral divisions, Windmill Cross, Kilpatrick, Timahoe South and Robertstown, with a total population of 4,698.