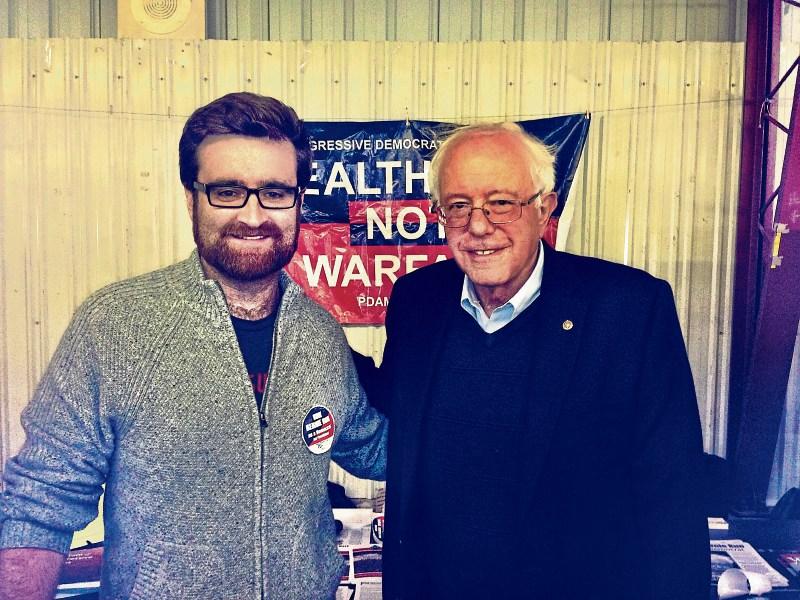 Boylan, from Naas, is a Director with the Progressive Democrats of America – an organisation that aproached the Vermont Senator in 2014 and convinced him to run for the Democrats.

Mr Boylan moved to the US in 2006, swapping an engineering job in Intel in Leixlip for a similar role in Portland, Oregon.

Within months he was volunteering on Barack Obama’s campaign.

“I always had an interest in politics and I knew what was going on in the US. George Bush was the President then and I’d be watching Bill O’Reilly on MSNBC and throwing stuff at the telly and my wife said I should get involved.”

Still working as an engineer, Boylan started to volunteer on the Obama campaign in Oregon.

“Knocking on doors and having an Irish accent was helping to swing some of the Irish American voters,” he said.

The 36-year-old soon graduated to the position of field organiser in Ohio for the 2008 election, where his organisation credit him with swinging the vote in favour of the Democrats on his patch.

Not long after he changed careers.

“In the media at home it was all Hillary Clinton and Trump and I started telling my parents about Bernie, sent a picture back and they’d be saying ‘he doesn’t look presidential,’” he laughed.

“Even at Christmas, I was down in Lawlor’s with my Dad and people would be asking what I was up to? Was I working with Hillary, and I’d be like ‘no, Bernie Sanders.’ They’d be like ‘don’t know him’ but in the space of a couple of weeks he’s gone from a nobody to somebody everyone knows.”

His work with the Progressive Democrats has given him unique access to Sanders.

Remembering an early conversation with the 74-year-old at the very beginning of their journey in 2014, Mr Boylan said: “We were in Wisconsin, going onto Iowa and having this political get together when he pulled me aside. We were walking through this field in farmland and he asked me how we looking for the event that night? I didn’t know the numbers and how many people were going to turn up but I said it was grand, fine.

He says to me “you are Irish right? You know my wife, Jane O’ Meara Sanders is Irish? If I do run for president and win the nomination, Jane will be the first Irish First Lady since Pat Nixon. Richard Nixon’s wife’.

“For whatever reason it was going through his head and he was already thinking of her being First Lady.”

The rise of the 74-year-old, from rank outsider to contender, ignited after the self-styled social democrat scored a near tie with party front-runner Hillary Clinton in the Iowa Primary – the first stop on the road to the Presidency.

The campaign to select a nominee has moved on to New Hampshire this week with pollsters predicting a Sanders win for the Democrats.

But already, Boylan is planning ahead and preparing groundwork for the Arizona Primary in March.

As a director of the Progressive Democrats, Mr Boylan and his colleagues endorse candidates for the House of Representatives and the Senate.

His role in Sanders’ decision to run for the President of the United States dates back to 2014 when volunteers from the party’s 100,000 members started to declare an interest in the senator.

“My boss Tim Carpenter got the idea, we launched a petition and got 30,000 signatures, then invited him to speak at our 10-year anniversary.

“When we showed him the petition he realised his message was resonating and we asked him to run as a Democrat because he wouldn’t get the same traction as an independent. He said he needed to talk it over with his family but already we were organising events in Iowa. It was the summer of 2014.”

Boylan and his colleagues later met Sanders at a breakfast in 2015 and soon after he announced his decision to run.

Boylan explained that the original plan to run Bernie Sanders was designed to police the politics of Hillary Clinton.

“We wanted Bernie to push Hillary more to the left,” he said. “Of course we wanted him to be president but it was more to force a good honest debate between him and Hillary Clinton so she wouldn’t get an easy walk to the nomination. We didn’t expect him to get beyond Iowa and New Hampshire and now he will get way beyond that because he has the people and he has the money. It has got to be hard for the Clinton’s to take.”

Comparing the America he arrived to in 2006 with today, and considering the rise Donald Trump, Mr Boylan said: “Obama has done a good job of getting the economy back on its feet. But the American dream is a little harder to grasp, the poverty rate is continuing to go up, college kids saddled with debt, people are worried about gun crime, what’s going on in the middle east is a big issue... there’s a lot of uncertainty.

“Someone like Trump is able to play the media very well. He is not beholden to anyone, he is able to give a speech and attack whoever he wants and end of day a lot of Americans think along those lines.

“But what’s happening with Trump and Bernie even savvy critics can’t call it Their heads are spinning.

“But the momentum is there with Bernie.”