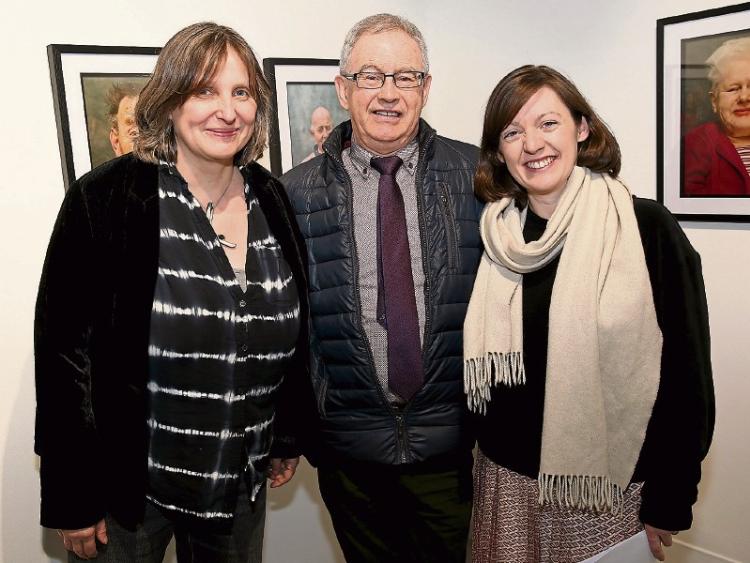 An exhibition called Rolling In The Years opened at the Riverbank Arts Centre last Saturday afternoon, February 29. This exhibition consists of portraits of some of Newbridge’s senior citizens, many of whom attended the opening day, as well as the photographers involved from the South Kildare Photography Club.

The award-winning Newbridge group is a voluntary club with around 40 members, which meets every Thursday in Ryston Sports and Social club at 8 o’clock.

“At a community meeting we came up with this idea. We initiated this project last year and we photographed roughly 20 senior citizens from Newbridge. When we were offered the opportunity to display our work in the Riverbank Arts Centre, we decided that we would extend our exhibition and we incorporated another 10 people into this current exhibition,” said John Leahy, a member of the South Kildare Photography Club.

“Initially this project was first on display for June Fest in 2019. It took perhaps two months to organise it and with the cooperation of Newbridge Day Care centre the exhibition was on display in Newbridge Town Hall. But unfortunately, most people didn’t get see it, because it was on only for one afternoon. Now we have it here for a month in the Riverbank.

“All the people in photographs are either from Newbridge or from the towns around the Newbridge.

“Initially we went to there Day Care Centre. They immediately were interested in our project and made a room available for us to take the photographs there,” he continued.

“Following that we got to know all the residents and majority of them wanted to get their photograph taken. So, we took their photographs with other club members, there were around ten people involved in taking photographs. We selected people then depending of their age. We asked about their life stories which proved incredibly interesting, from farming in Belfast to boat or barge drivers on the canals.

“Some of the female participants had a quite different work life experience compared to the men. One of them worked as a weaver in Northern Ireland and other ones worked both here and in London. Quite a number of people spent long periods working in England and some of the others spent most of the time in Australia.”

“Quite a number of our portrait people worked in the Irish Ropes which was one of the very few facilities what offered employment in the region. And they have very fond memories of their time and the skills they acquired while working in the Irish Ropes.”

The exhibition will be on at the Riverbank for the month of March and all are welcome.

Mr Leahy said: “This exhibition is about real people, how and where they lived, how they got through their lives and they are still successfully enjoying their current lifestyle. It’s unlike Facebook where you have so many friends — these are real people and we hope that their personalities are clearly obvious from their portraits.”