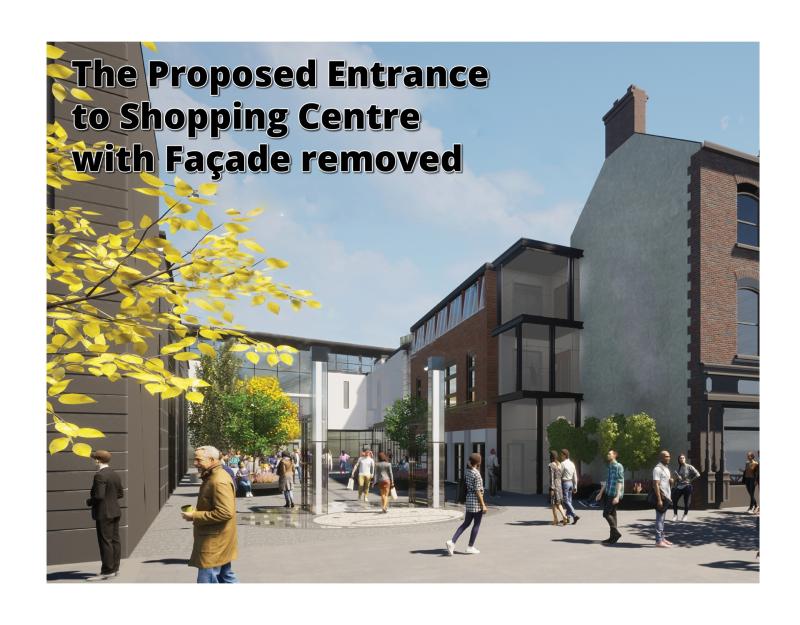 The Naas Shopping Centre owners have withdrawn an appeal against a decision to reject a plan to create a new entrance to the building from the main street.

However the company still wants to proceed with the original plan to do away with the historical facade - which also houses one of few ATM machines in the town and is apparently applying pressure to have its proposal accepted.

The BOI has already shut ATM machines elsewhere in Naas and Kilcullen, where the branch closed.

The Roche Group, which refers to the “Naas Town Centre Shopping Centre” has stood down the appeal  which it says was “brought about by Kildare County Council’s refusal in May to grant planning for a new pedestrian entrance.”

The company describes this as “a gesture of goodwill to get Kildare County Council officials and local area county councillors together for discussions to have the impasse resolved quickly and not delay the project any longer.”

A company statement added “discussions could not take place when the appeal was in place with ABP.”

However it was the company which lodged the appeal.

Kildare County Council pointed out that the buildings that would be affected by the proposal are of historical and archaeological importance to Naas and all local authorities are duty-bound to protect such structures.

The company also says that a petition organised by long-established Naas-based business Conway, Conway & Co Accountants has been signed by 124 businesses and ratepayers from the town in support of the progression of the shopping centre and the removal of the derelict façade on the main street in line to what is proposed by the Roche Group to create a pedestrian entrance into the site.

“These businesses are also looking to engage with the council officials and councillors to remove the protected status of the building that is now derelict next to the existing Bank of Ireland on the main street to allow works to proceed and finish off the shopping centre which will bring badly needed footfall and jobs to the town centre.”

Of importance to note is that the new Naas Local Area Plan specifically allows for the demolition of a protected structure in exceptional circumstances. It’s been claimed that the façade on the main street does not warrant protective status and this has been “further bolstered” by a conservation architect  “with the historical society in Naas as well as the historical buildings department in Bank of Ireland who concur with these findings.”

The company claimed there is  huge interest “from many commercial entities who want to locate as tenants in the shopping centre site but they first need the entrance agreed and be resolved.” It also claims that over 700 jobs will be created on the site on completion.

Roche Group CEO Ger Roche said: “We have old maps of the town which show there was a laneway in the location exactly where we wish to create the new pedestrian entrance into the shopping centre which will create hundreds of new jobs. The building which needs to be removed is a derelict shell and we have pictures that prove this. We now need to have discussions without delay with the council and its elected members and we have taken the first step to make this happen and therefore have positive constructive talks in order to get this investment going and create badly needed jobs and footfall for the town which is a win-win for everybody.”