And they don't get involved in community groups 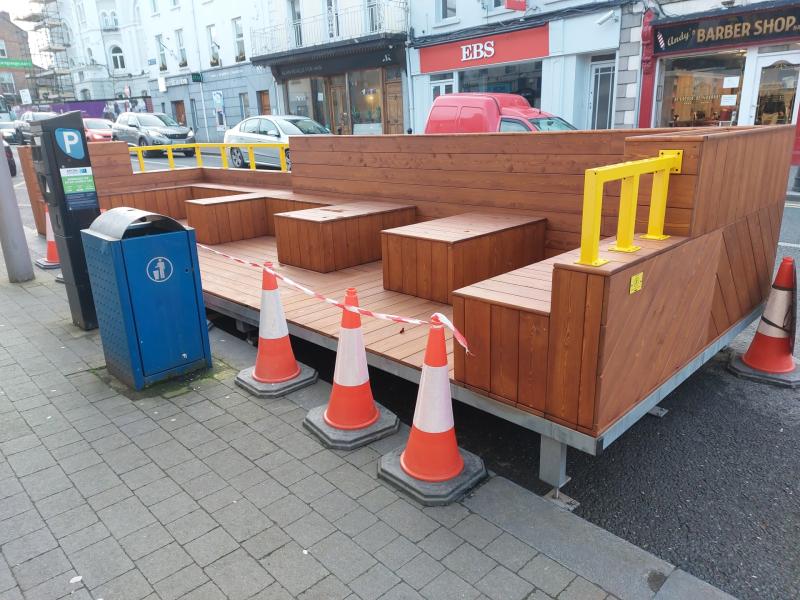 Many of the critics of the parklet project in Naas are the people who moan on social media platforms about other issues, a councillor claimed — and many of them don’t get involved in community activities. That is the view of Kildare politician Fintan Brett following criticism of the provision of a parklet at North Main Street.

“It’s always the same people moaning; it means you’re doing the right thing if they are moaning,” he told a Naas Municipal District meeting on April 12.

Another councillor, Anne Breen, asked that the parklet in South Main Street be relocated to a ‘more acceptable and suitable location’.

That prompted an observation from Cllr Brett that the parklet is North Main Street — and that there is no parklet in South Main Street, an oversight acknowledged by Cllr Breen.

Cllr Breen said the parklet does not enhance the town’s appearance and ‘people have said to me that it is a skip’.

She said she had received many complaints adding ‘it’s on the road and it will give rise to health and safety issues’.

Cllr Breen said it would not promote tourism to Naas and ‘we’re kidding ourselves if we think it will’.

She called for greater public consultation especially given that five car park spaces are to be given up at the Presbyterian Church and spaces will also be lost at South Main Street, near Rustic. Cllr Breen said barriers at the side mean that people don’t know that it is open.

Cllr Breen was told that the cost of the parklet was €30,500 (not including VAT) and it was designed and constructed by local companies.

She asked for the VAT amount, who built it and if the job went to tender but this information was not forthcoming.

Cllr Brett, however, countered that it is a ‘fabulous idea’ to encourage people to sit out and have a coffee as well as creating more space in the area.

Cllr Bill Clear was also in favour and opposed the idea of moving it.

“It looks nice, some people like it and some don’t (and) it will always be controversial to close a couple of parking spaces.”
He appealed for the project to be given a chance.

Cllr Evie Sammon said the councillors need to sit down and talk about it with KCC officials ‘before we move it or put in others’.
Mayor Seamie Moore asked for Cllr Breen’s call to be withdrawn.

“Some people want it and should have the chance to use it but noone is saying it’s perfect. It has to be given a decent trial run,” said Cllr Moore.

Cllr Carmel Kelly said change is ‘always difficult’ and added that the public realm work at Poplar Square ‘is beautiful and people are getting used to it’. Cllr Kelly said the parklet ‘doesn’t look well’ but it’s here to stay.

Tilted
KCC official Eoghan Ryan said the parklet is well designed. But, he said, it is situated on a slope on the street which means it is tilted, and landscaping ‘would help to soften its appearance’.

A meeting, likely to take place behind closed doors, between the Naas councillors and KCC officials will likely decide the future progress of this — and other — parklets in the town.