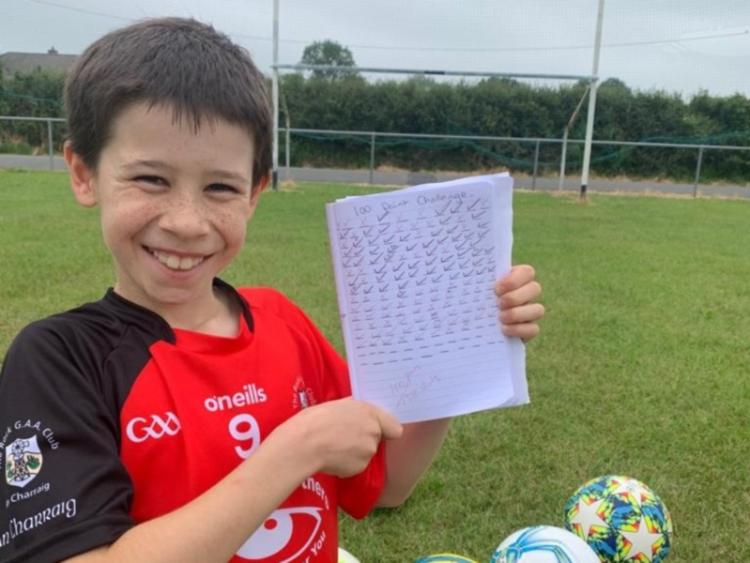 Sean Power Conlon from Caragh checks off another challenge

A Kildare nine-year-old completed a 30 day challenge and raised thousands of euros for Ronald McDonald House.

Sean Power Conlon, living close to Caragh, carried out all sorts of challenges during June, to raise funds for the charity, raising in excess of €2,500.

His mother Danielle said: “It was not a task on our side, he just wanted to do it, different people donated different challenges for him, he just went and did it.”

According to Sean, the best part was ‘doing the challenges and having fun.’

His mother Danielle said, of his three-month-old sister, Peggy, ‘he is a great big brother.’

She said: “We went outside our normal walks just to get the 5k.”

30 Challenges for 30 Days is a fundraising event for Ronald McDonald House. People followed Sean on social media over 30 days with his challenges.

Sean’s father and himself did a 5k run together. The Blind Taste Food Test, involved Sean and his step- dad being given spoonfuls of different foods, including gherkins, mayonnaise and baked beans.

Sean did not mind the taste test but the skipping test was the most challenging.

On day 30, he shaved his step-dad Brian’s head — a challenge set by Brian’s work colleagues at KTL in Naas.

Sean also did a lot of football challenges. He had to get 100 points, kicking a football through a tyre swing.

Sean’s favourite footballer is Lionel Messi, he loves football, and missed soccer training the most during lockdown. He is a big Liverpool supporter.

His mother said: “He had just started training with Caragh Celtic when lockdown hit. He plays GAA with Clane Celtic, but is looking forward to getting back into it all.”

During the 30 day challenge, Sean collected beer cans, cigarette butts, along the road.

He also found things hidden in the long grass.

Sean baked a Ronald McDonald apple pie, and his mother said, ‘while it did not taste great, it was his first time making it.’

Sean, a chatterbox, also stood like a statue for 15 minutes, without smiling and joking, and he says that this was ‘very hard.’

Another thing he did was carry out a DJ set for 15 minutes — but he wants to be a soccer player when he grows up, not a DJ.