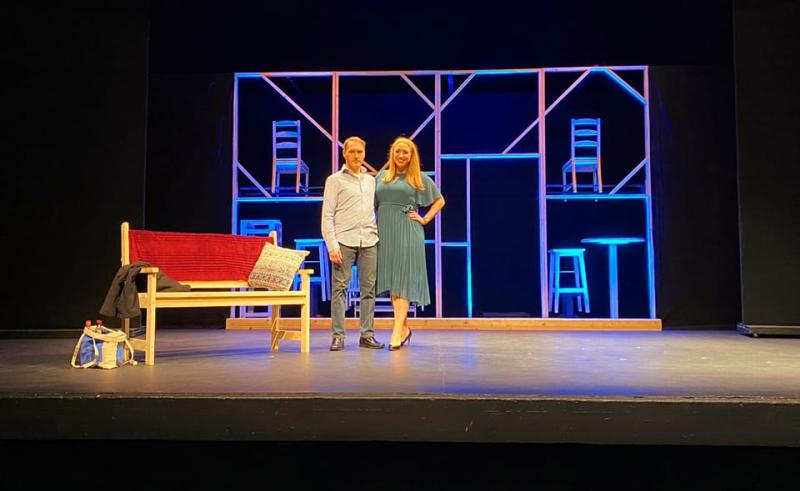 Actors from The Good Father

It’s back! The Kildare Drama Festival makes its return after an enforced absence due to Covid-19 restrictions.
With productions ranging from searing drama to hilarious comedy, the festival promises to be a tonic in these troubled times, according to the organisers.

Running from Thursday, March 31 until Friday, April 8, admission is €12, concessions for children and OAPs are €10 and the season ticket for all eight nights is recession proof at only €50.

Tickets are available at Kildare Town Heritage Centre at 045 530672 and at the box office. Performances start each night at 8pm.

Festival chairperson Noreen Quinlivan confirmed that the committee are currently putting the final touches to the festival, where drama groups will battle it out for the top prize of the Leinster Leader Perpetual Cup.

“To facilitate the performing groups we have pushed the festival back a little and thanks to the CMWS Hall committee for accommodating us. We are really looking forward to welcoming the drama groups and the audiences, old friends and new, to the festival particularly with no festival last year.

“Special thanks to our patrons and local businesses who continue to give us great support.

“Thanks also to Kildare Credit Union and Kildare County Council who are our principal sponsors. We also look forward to welcoming our adjudicator Tony McCleane Fay who will share his vast knowledge of the theatre and the performances with the audiences each night”.

The festival kicks off on Thursday, March 31, with Corn Mill Drama Group performing The Door on the Left by Killian McGuinness. Festival organisers explain that this is a play set in the aftermath of the signing of the Treaty and the outbreak of civil war.

The play focuses on a newly appointed housekeeper who has ‘notions’. This is a new play performed by the former All-Ireland winning drama group from Carrigallen.

Friday, April 1 sees Kilworth Drama Group from North Cork take to the stage with The Quiet Moment by Mike Finn — a poignant play about memory.

The festival resumes again on Monday, April 4 with a second new play, An incident With Dave Cotter by Shaun Byrne.
Set against the events of Bloody Sunday a solider is confronted by a family member 20 years later. The play is performed by Butt Drama Circle, Ballybofey.

Regular Kildare visitors, Bunclody/Kilmyshall Drama Group present The Good Father by Christian O’Reilly on Tuesday, April 5 — a comic and heartfelt drama about a couple drawn together at New Year’s Eve and how they attempt to forge a relationship against all the odds.

Wednesday, April 6, sees another chance to catch Martin McDonagh’s The Beauty Queen of Leenane, this time presented by the Ray Leonard Players, Claremorrris. A mother interferes in her daughters first, and potentially last, romantic relationship which sets in motion a chain of events that are as tragically funny as they are horrific.

On Thursday, April 7, the Phoenix Players Tubbercurry will perform The Communication Cord by Brian Friel, the master playwright’s only farce which is brilliantly orchestrated and choreographed — and it is constantly hilarious.

Friday, April 8 sees Kilrush Drama Group bring a close to the festival with Little Gem by Elaine Murphy — a comic tale of three generations of the same family who confront their individual challenges with courage and humour.