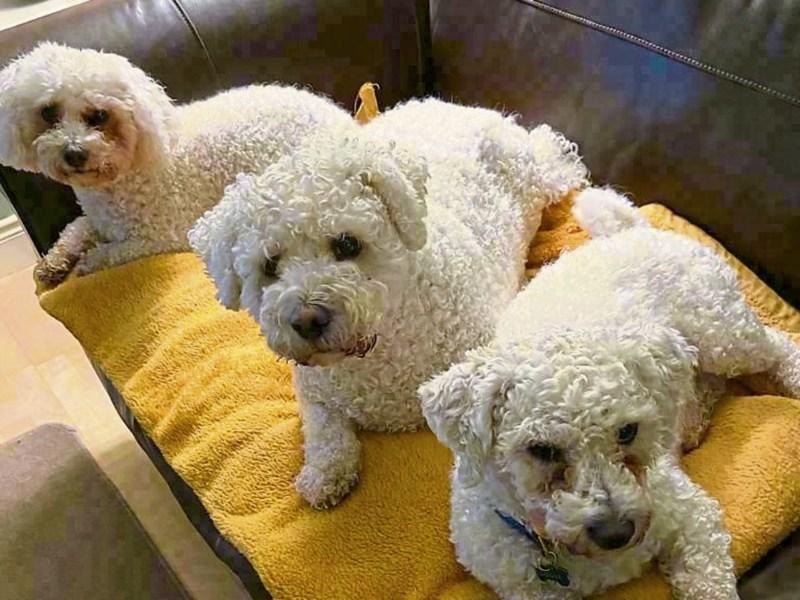 Mitch, Howie and Louie on the couch in their comfortable home

Last year we featured a Bichon Frise named Curly who had been abandoned on the side of the road and came to us from the pound.

His appearance suggested that he hadn’t been treated very well and he had a heavily matted coat that looked like it had never been trimmed.

He was very popular with all the volunteers at the shelter because of his abundant energy.

He was adopted last October and we are delighted to say that he is enjoying his new home in the company of two other Bichons, Mitch and Howie.

His owners John and Patricia said that at first when they adopted Louie it took a while for him to get used to being in a house and he didn’t seem to understand affection.

He must have spent his early years outdoors with little human contact.

He is getting loads of affection now and enjoys walking in the Curragh with Mitch and Harry followed by long snoozes curled up on the couch.

Our charity shop Noah's Ark would be very glad to receive any donations of clothes, in saleable condition. The shop in Cutlery Road Newbridge is open from Monday to Saturday from 10am to 5pm.

There are ongoing roadworks in Cutlery Road for another few weeks. We can arrange a donation drop-off at the shelter in Athgarvan on Saturdays from 10am to 2pm.

If you intend calling to the shelter please phone in advance on 086 3413017 so that we can expect your visit. The Eircode for the shelter is W12 EV60.

All profits from Noah's Ark go to the support of the animals in our care. None of our volunteers are paid.