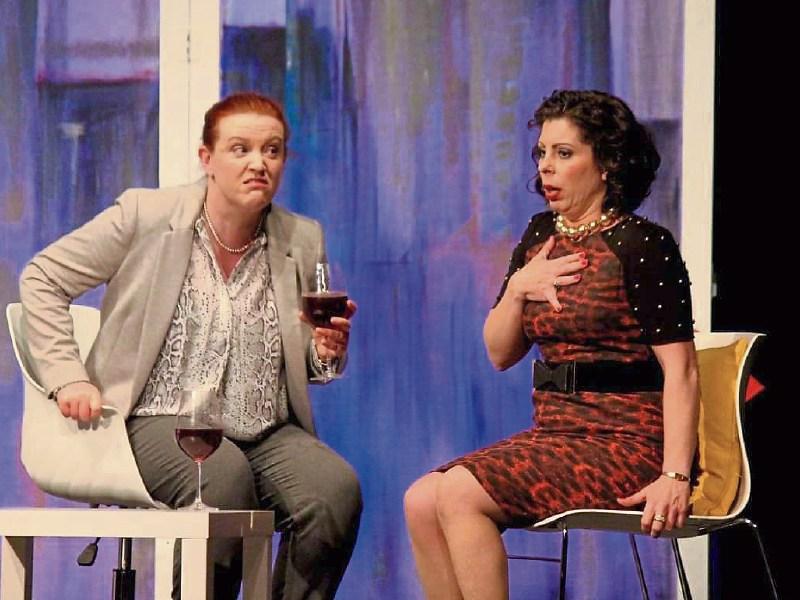 The Moat Club in Naas has qualified for the All-Ireland One Act Drama finals with wins in Goresbridge, Dundrum and Coolgreaney, leaving them at the top of the leaderboard.

In recent years, the Moat Club has dominated the all- Ireland finals, winning three out of the last four, and this year’s play is again a strong contender.

The Way Of All Fish is a modern satirical comedy, written by Elaine May and directed by Mary Newman, and Naas audiences will get the opportunity to see it for one last time before the team heads off to Ennis and the finals.

The Way Of All Fish was first performed in Naas in October and had a great reaction from audiences who likened it to a tennis match, with attention constantly shifting from one character to the other, and strong suspense right up to the last moment. It features two characters, a multi -millionaire boss and her struggling secretary.

Ms Asquith, wealthy and entitled, is played with great style and assurance by Sarah Gallagher while the seemingly meek Miss Riverton is brilliantly captured by Amanda Ryan, revealing hitherto concealed aspects of her character as the wine flows over the course of the play.

Both actors have won multiple awards for their performances in this and other productions and the quality of their acting is wonderful. Production values have also been recognized by adjudicators, with set and lighting, designed by Conor O’Connell, both winning awards, and excellent stage management by Ciara Breslin also acknowledged.

All in all, this play is a treat for audiences, with suspense, satirical comedy and a most intriguing pot that includes no mention whatsoever of the issues that have plagued us all over the past months.

Tuesday, November 30, at 8 pm in the Moat Theatre offers audiences the last chance to see the play before it heads off to the finals. The team would love the support and encouragement of all the drama enthusiasts in Naas and surrounding areas, and they guarantee you a very entertaining night out.

The theatre has an excellent record of Covid compliance and every precaution is taken to make you safe, comfortable and very welcome.

Book tickets via the Moat Theatre box office at www.moattheatre.com.