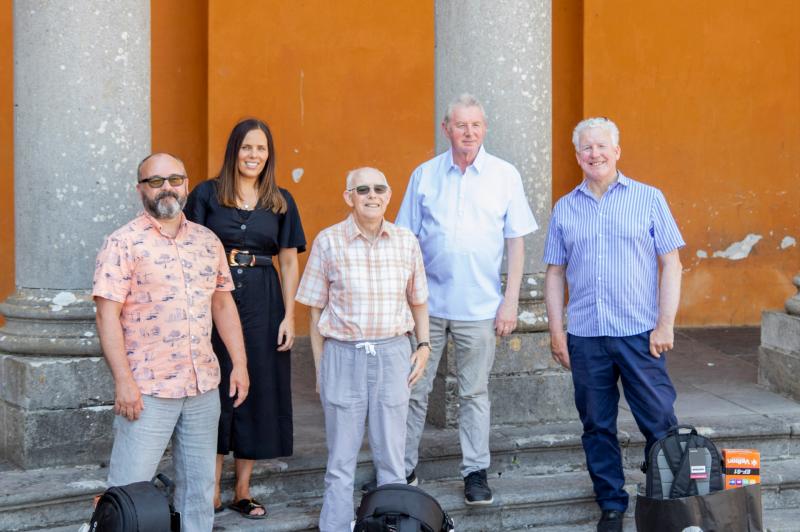 The three winners with staff members from Intel

Intel Ireland recently sponsored a photography competition for the Celbridge Camera Club inviting its members to capture images that would challenge people to think differently.

The Think Differently photography competition invited members of the camera club to submit still photographs under the themes of Technology, The Natural World, People and Architecture.

The competition had three categories – novice, intermediate and advanced – with a prize being awarded to a winner of each. The winning photographer in each category received a camera equipment bundle that included a variety of items such a digital printer, tripod, filter kit and backpack.

The photos were judged by a panel which included representatives from Intel and the Kildare Gallery as well as a professional photographer. In adjudicating the entries, the judges took into consideration originality, vision, lighting and colour balance and the composition of the image.

The organisers said there was a wonderful response to the competition with a wide selection of diverse and interesting photos submitted. After much deliberation, the following winning photos were selected;

Bug’s Life
A photo taken by Giedrius Rasimavicius won the prize in the Novice section. The photo, which represented the natural world theme, captures a shot of bugs gathered on a stump in the woods on a warm summer morning.

Alone in a crowded room
Tony Waldron’s photo ‘Alone in a crowded room’ won in the Intermediate category. In the shot, dominoes represent people with the lone domino depicting a shy person who, as yet, knows nobody there. The lone domino is intentionally the only domino shown in sharp focus. The idea came to Tony when he saw new members of the camera club, including himself, hoping for someone to approach and include them. He says however that “Celbridge Camera Club is a friendly place, so ‘domino’ wasn’t alone for long!”.

Natures Spindryer
Tom Ormond’s photo was named as the winning shot in the advanced category. Tom explains that experimenting with the slow shutter speed on his camera resulted in this water spray pattern as a Kingfisher shook himself dry after taking a dive in the water.

Intel’s Communications Manager Sarah Sexton said; “We were delighted to come together with the Celbridge Camera club on this project. The world around us is filled with beauty and diversity and we were excited to see how this would be captured through the medium of photography. We were blown away with the entries received and with the originality, thought and skill that has gone into bringing them to life. It’s always such a pleasure for us to work with and support clubs in our local area”.

Celbridge Camera Club was formed in the early 1980’s and now has close to a hundred members who live in Kildare and the west Dublin area. A member of the Irish Photographic Federation, it meets on Monday nights during the winter and autumn and runs photographic trips on Monday nights during the summer. Its photography includes visual and audio visual elements and members have won prizes in top national and international competitions and salons. It is particularly welcoming of new members who are completely new to photography.

For the last two years the club brought out a calendar with 50% of the net proceeds going to the National Council of the Blind of Ireland. The calendar was sponsored by local businesses and sold in shops in Celbridge and surrounding towns.

The club currently involved in a project being supported by the Intel Pride of Place project, to photograph Celbridge and areas around it for both print and digital formats. The aim is to provide a record of the area for future generations. The club undertook a similar project in 1990 when then chairperson, Dallas Camier, presented a Photo Album to the National Library. The photographs were taken by club members at that time and the presentation was covered on RTE news.