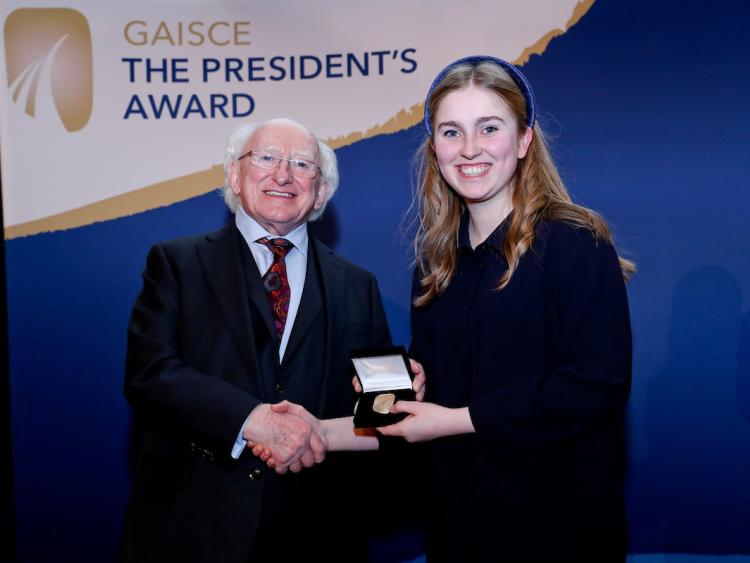 A young woman from Kildare has received one of the most prestigious youth award in Ireland, the Gaisce Gold Award.

Molly Parmeter, who hails from Athy, was recognised at a special ceremony held by Gaisce - The President’s Award in Dublin Castle, on Wednesday, December 4.

Molly was among 77 inspirational young people from across Ireland presented with awards from from President Michael D Higgins.

The President’s Award is a self-development programme for young people between the ages of 15-25, which is proven to enhance confidence and wellbeing through participation in personal, physical, community and team challenges.

Molly completed her Award with Kilkenny College. The ceremony was MC’d by the inspirational Sinéad Burke, teacher, writer, broadcaster, fashion-admirer and advocate for disability.

Since his first inauguration in 2011, President Higgins has been a strong supporter of the Gaisce programme. As part of his focus on active citizenship and the promotion of a more inclusive society, the President has paid tribute to Gaisce Awardees for their community work and their support for civil society groups. The President has also praised the President’s Award Leaders, who he said play a pivotal role in guiding the young people in the development of their talents and encouraging them to contribute to the betterment of society.

Speaking about the Gaisce Gold ceremony Yvonne McKenna, Chief Executive of Gaisce – The President’s Award said: “I heartily congratulate this year’s Gold Awardees who have shown incredible fortitude in achieving their Gaisce Gold Award. Achieving a Gaisce Award is a marker of each Awardee’s determination to realise their ambitions. I hope that in the challenging times which life can often present, they are encouraged by the memory of this moment where all their endeavours were recognised and celebrated. There is a lot more in each of us than one might think.”

This year’s Awardees hail from 17 counties and 42 Gaisce Award Partners (who deliver the Award programme). Since its inception in 1985, over 190,000 young Irish people have received a Gaisce Award, including former Rose of Tralee/Irish MEP Maria Walsh and Irish rugby international and Connacht player Robbie Henshaw.

Gold Awardees have been partaking in a broad range of activities while undertaking Gaisce such as teaching coding to young kids, sailing around the Irish coast, learning Bharatanatyam (Indian Classical Dancing), walking the Camino, partaking in Suisha Inclusive Arts for children with autism, improving their Irish in the Gaeltacht and helping out with local charities such as St. Vincent De Paul and Irish Cancer Society.

Each Awardee successfully completed five challenge areas as part of their Award. They dedicated an hour a week for 52 weeks across three challenge areas– volunteering with a charity or community group, developing an existing skill or learning something new, and becoming more active through sport or exercise. Awardees have also completed a four-day adventure journey while discovering the great outdoors as part of a team and broadened their horizons on a five-day residential project outside of their usual community.