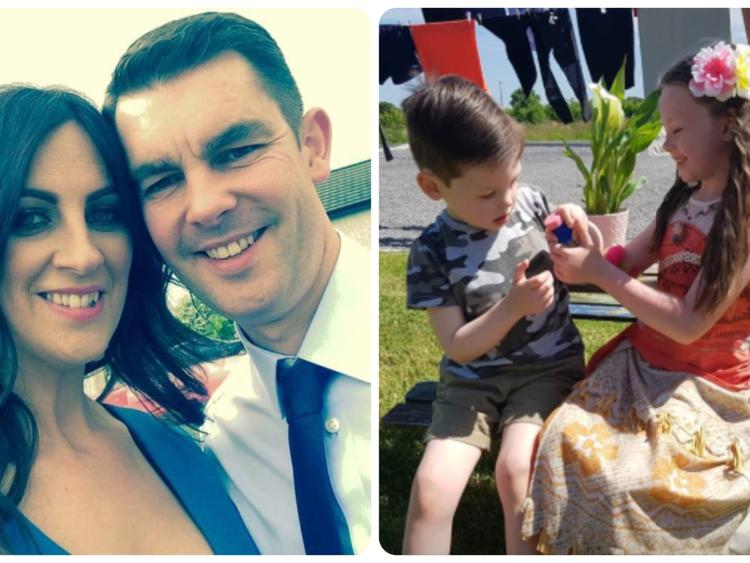 Two local GAA clubs have committed to playing a challenge match in aid of an Edenderry family hit with tragedy recently.

Kildare's Clogherinkoe GFC and Ballyfore GAA in Offaly will play a challenge match in aid of Emily Harte McNamee, her husband Paul and two children.

The game will take place at 3pm on November 2 in Clogherinkoe.

There will be music, an auction and raffle that evening in the clubhouse. Tickets are €10 and are on sale from Clogherinkoe and Ballyfore GAA.

Both clubs have urged people to "please support in anyway you can."

The family was hit hard on Monday, September 2, when Emily Harte McNamee suffered a cardiac arrest while at home alone with her young daughter. The quick actions of primary school pupil Pippa, aged 6, are credited with saving her mother's life.

Emily was taken to hospital, where she remains in ICU in a critical condition, fighting for her life, ever since.

A GoFundMe page was set up by Paul’s friends to raise much-needed funds as the young father juggles his job, tending to his wife's bedside and caring for their two young children, one of whom, Aiden, requires 24-hour care.

Five years ago the couple's world was turned upside down when at the age of three months, their baby boy Aiden had his first seizure. A year later Aiden was diagnosed with Dravet Syndrome which is a rare and catastrophic, drug-resistant form of epilepsy that can bring on fatal seizures, requiring 24-hour care.

Currently, there is no cure for Dravet Syndrome. Ever since the couple spend most of their time caring for Aiden and fighting to secure the best possible treatments and resources to allow him live as full a life as possible. Aiden is a happy affectionate child who is full of life. He loves to play, laugh and generally mess about like the proper little boy that he is.

Like many parents who have children with unique needs, they experienced the difficulty in securing a school place for their son. Emily and Paul successfully fought to get Aiden full hours in a school that could cater for his needs and also which was close to their home and to an ambulance bay in Edenderry.

For Emily and Paul, their little boy starting school was a massive milestone in their life. Monday, September 2, was a monumental day for Emily and Paul as Aiden started in the same school as his big sister Pippa. They were proud, relieved and excited with this achievement.

Sadly, it was on that evening Emily suffered a cardiac arrest while home with her six-year-old daughter Pippa. Pippa sought help and contacted her dad and the emergency services, actions which saved Emily’s life.

Paul's friends say they set up the fundraiser to support him through this difficult time.

"With Emily fighting to recover consciousness and Aiden needing constant care and a little girl who is trying to come to terms with what has happened, Paul is now trying to be there for and care for the three people he loves more than anything in the world," they said.

"Even with the help and support of both Paul and Emily’s families, their friends and Aiden’s nurses, it is both a horrendous and extremely difficult time in their lives.

"This page has been set up by Paul’s friends to raise much-needed funds. As Emily was Aiden’s full-time carer, the family now have the added financial strain of paying for the extra care needs for Aiden while Paul tries to hold down his job and spend time by Emily’s bedside.

"The funds raised will pay for increased childcare costs, other medical and family expenses arising from their situation, future treatment/care that which will be required for Emily and please God, to adapt their home if and when Emily reaches a stage where she can come home.

"All donations no matter how big or small would be greatly appreciated. A big thank you to everyone who has helped so far, it doesn’t go unnoticed. Please keep Emily, Paul, Pippa, Aiden and the Harte and McNamee families in your prayers. Thank You," they concluded.

You can donate to the fundraiser for Emily and her family HERE.