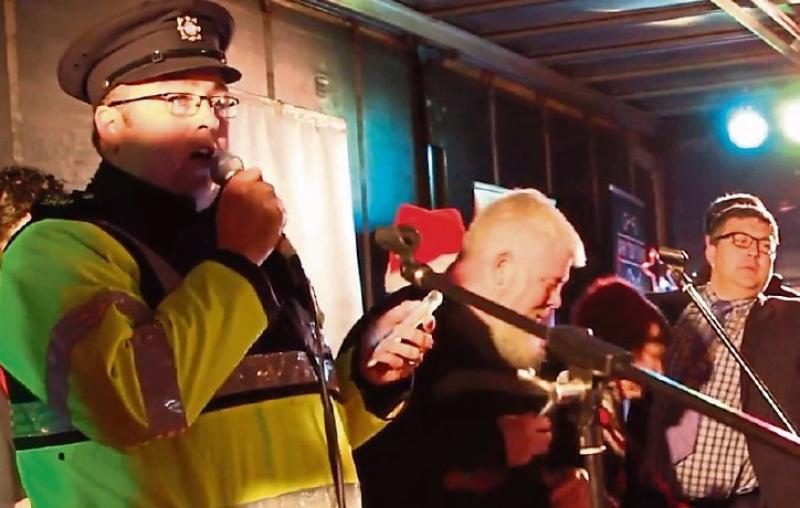 Garda Sean O'Mahoney brought some Christmas cheer to Athy at the switching on of the lights last Sunday, December 5 when he serenaded the crowd with his own version of Hallelujah along with local musician and singer, Barry Keatley.

Barry was MC for the night as a huge crowd turned out for the festive occasion. The event was organised by the Athy Town Promoters Group, which is made up of local councillors; community worker, Patricia Berry; and a number of other organisations and business groups. The snow machine also added to the atmosphere. Athy Toastmaster's David Clinton brought Santa in on a fire services train and had a chat with the man in red on the stage.

Entertainment was provided by Rockabilly Rebels, Shooting Stars and Athy Musical and Dramatic Society who are performing While Sheppards Watched on December 19.

"I would like to thank all the organisations that were involved in organising the event, the community for turning out in such large numbers, there was definitely 3,000 to 4,000 people there. The main sponsor was Kildare County Council and we also had support from International Concentrates, Athy Lions Club, and Pat and Marie Geraghty from the Card and Party Shop," said Patricia Berry.

"We also had assistance on the night from the Kildare County Show, Civil Defence, the Order of Malta, Athy Tidy Towns and the Athy Gardai."

Check out the fantastic celebrations with this video taken by Raphael Hunter.