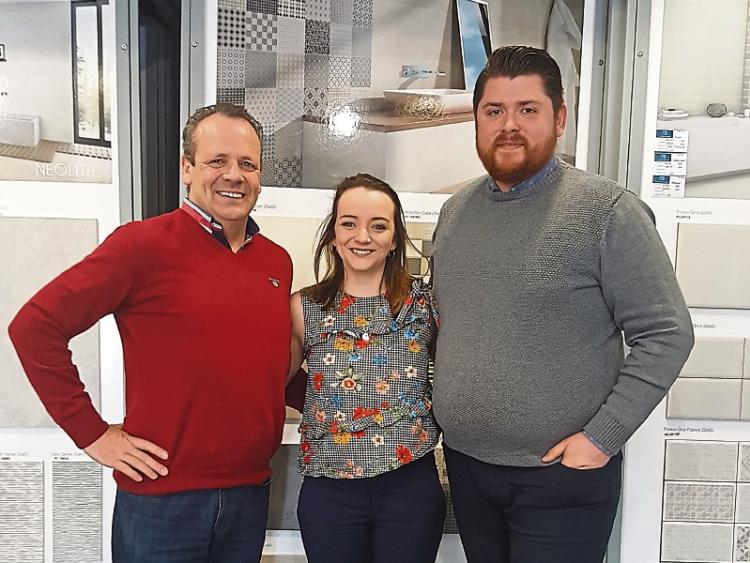 Having excelled in the commercial tile supply business, a Newbridge father and daughter team have now set out to conquer the domestic market.

Brian Cornally and his daughter Laura recently opened the Newbridge Tile Store showrooms in the Courtyard Shopping Centre (beside the Zipyard).

The pair decided to use their expertise on major projects to help homeowners on their own renovation projects and new builds.

A native of Piercetown, Brian is involved in Newbridge Drama Group and Moorefield GAA club. His dad, John is very well known in the town and used to run greyhounds at Newbridge Greyhound Stadium.

“I found a lot of people were coming up to me asking me if we had tiles for their bathroom or kitchen, so we decided to open up a showroom in Newbridge,” he said.

“Don't get me wrong. It's been tough, but we are working very hard and it's early days.”

Back in the boom, there were four tile shops in Newbridge, but all unfortunately closed.

Having amassed 35 years in the flooring industry, Brian spotted an opening for a new store.

His daughter Laura previously worked for Kilkenny for three years.

Despite being only a small business, Brian has managed to secure some major contracts including the supply of tiles for the €17m Munster Rugby High Performance Centre and 25m diving pool at the University of Limerick.

He also was awarded a contract for the Hilton Hotel in Dublin, some of the McDonalds' franchises and Butlers Chocolates.

“It's hard for small businesses out there. I started up the business when I became unemployed and the Kildare Leadership programme really helped me. I don't think a lot of people would be in business if it wasn't for Kildare Leader. I found them a huge support,” he said.